Get latest articles and stories on India at LatestLY. Vice president M Venkaiah Naidu on Saturday, referring to the hijab row in Karnataka, slammed the "unnecessary controversy" that erupted in the state and said that there should not be any discrimination as students should be "guided by uniform" in schools. 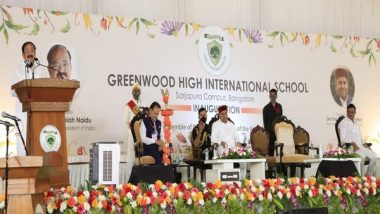 Bengaluru (Karnataka) [India], February 26 (ANI): Vice president M Venkaiah Naidu on Saturday, referring to the hijab row in Karnataka, slammed the "unnecessary controversy" that erupted in the state and said that there should not be any discrimination as students should be "guided by uniform" in schools.

Addressing an event after inaugurating the Indoor Sports Arena at Greenwood High International School here, Naidu said, "The unnecessary controversy should not be encouraged, like the controversy going on in Karnataka now. In a school, you should be guided by the school uniform. Whatever uniform it is. And also discipline, dynamism, devotion, dedication that will give you promotion to nation and education."

Pointing at the uniformity of all Indians irrespective of caste and religion, the vice president said that there should not be any discrimination.

"Irrespective of caste, creed, sex, religion we are all one we are all Indians, Indians first. That should be remembered by one and all. There should not be any discrimination," he said.

Naidu also spoke on the importance of our mother tongue and how students should be encouraged to learn their mother tongue. He advised students to respect the mothers, nature and our gurus and always respect our culture and diversity.

Meanwhile, Karnataka High Court on Friday reserved its order on various petitions challenging the ban on Hijab in education institutions.

The hijab protests in Karnataka began in January this year when some students of Government Girls PU college in the Udupi district of the state alleged that they had been barred from attending classes. During the protests, some students claimed they were denied entry into the college for wearing hijab.

Following this incident, students of different colleges arrived at Shanteshwar Education Trust in Vijayapura wearing saffron stoles. The situation was the same in several colleges in the Udupi district.

The pre-University education board had released a circular stating that students can wear only the uniform approved by the school administration and no other religious practices will be allowed in colleges. (ANI)