India News | Home Testing Kits May Give False Negative Reports Even After Having COVID Symptoms: Expert

Get latest articles and stories on India at LatestLY. There are chances of false-negative reports in rapid antigen home testing kits even after having COVID symptoms and people should self-isolate themselves as a precaution, said Dr Harsh Mahajan, Founder and Chief Radiologist, Mahajan Imaging. 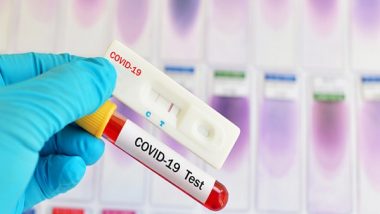 New Delhi [India], January 22 (ANI): There are chances of false-negative reports in rapid antigen home testing kits even after having COVID symptoms and people should self-isolate themselves as a precaution, said Dr Harsh Mahajan, Founder and Chief Radiologist, Mahajan Imaging.

Speaking to ANI, Dr Harsh Mahajan said, "There are two kinds of tests that are being done. One is the home tests, which are the rapid antigen tests and these have quite a limited sensitivity. These are about 50 per cent as sensitive as the gold standard RTPCR test, so you may get a false negative test on these testing kits."

He said in many cases, false negative has been reported even after showing symptoms of COVID.

"In these home test kits, there are chances of not taking proper sampling from the back of nose or throat. As result, a 'positive' result might not come. The chances of false-negative reports in RTPCR tests are only 10 per cent since tested are done in the lab," he said.

Dr Harsh Mahajan further said when a patient is symptomatic, then, by and large, the RTPCR test comes positive if the sample is obtained properly and transportation is done properly.

"With the Omicron which is now the predominant variant, the incubation period is lesser and I would suggest people should get tested on the third day. If you have the disease, you will come positive. Of course, if the symptoms start, then one can get tested on the same very day. Because once symptoms start then there is a likelihood that RTPCR test report comes positive," Dr Mahajan emphasized.

He said there are three sub-variants of Omicron -- BA1, BA2 and BA3 and the predominant variant is BA1. (ANI)