India News | I Should Be Removed as PCC Chief if Someone else Can Strengthen Punjab Congress: Sunil Jakhar

Punjab Congress Chief Sunil Jakhar on Friday said that he should be removed from his post if someone else can strengthen the party. 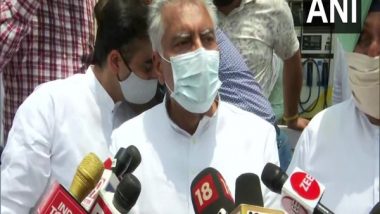 Mohali (Punjab) [India], June 11 (ANI): Punjab Congress Chief Sunil Jakhar on Friday said that he should be removed from his post if someone else can strengthen the party.

Interacting with media persons, Jakhar said, "Congress will fight the assembly elections in Punjab with full strength. I have been saying since day one that if appointing someone else as the Punjab Congress Chief strengthens the Congress party, then, it should be done and I should be removed."

On whether Captain Amarinder Singh will be the party's face for the forthcoming state elections, Jakhar said, "I have also put my opinion before the committee. It is clear that there is only one captain at the party. Captain Amarinder Singh is our strong and big figure. We can only share our opinion on whether to make him the face of the party in the next election or not. But, the final decision will be taken by the Congress high command and Sonia Gandhi."

According to sources, the three-member Congress panel in its report to party high command has suggested Captain Amarinder Singh should remain the party's face in the coming election and Navjot Singh Sidhu should be given an important post.

The panel was formed by Sonia Gandhi to resolve the widening differences between party leaders - Captain Amarinder Singh and Navjot Singh Sidhu.

Now, eight months before the elections, the challenge before the committee was complex. The dispute, which initially started with the tussle between Captain and Sidhu, has gone beyond them.

The Congress panel had met nearly 50 Punjab MLAs in the national capital over the last week.