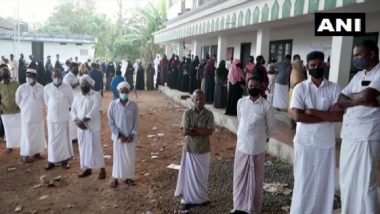 Thiruvananthapuram, December 14: Polling for 6,867 wards in 354 local bodies across Malappuram, Kozhikode, Kannur and Kasaragod is underway for the third phase (last phase) of local body polls in Kerala on Monday.

Voting is slated to take place from 7 am to 6 pm. Chief Minister Pinarayi Vijayan was seen voting at a polling station in Pinarayi, Kannur in the early hours of Monday morning. Also Read | Karnakata Apple iPhone Plant Violence: Wistron Reports Losses Worth Rs 440 Crore, Says Thousands of iPhones Were Stolen During Rampage.

Kerala: People stand in queues to cast their votes in the third phase of local body elections; visuals from a polling station in Malappuram pic.twitter.com/pAQ6EZVePV

"This includes 71,906 first-time voters and 1,747 NRI voters. As many as 10,842 polling booths have been set up. Webcasting has also been introduced in 1,105 problematic polling booths," said Bhaskaran. A total of 52,285 officers have been deployed for the election duty.

"Those who are Covid positive and those in quarantine and in the certified list can vote directly at the polling station by presenting a certificate issued by the Designated Health Officer of the Department of Health during last hour of polling," the SEC added.

Following the death of the candidates, the polls in Tathur Poyil (11) in Kozhikode Mavoor Grama Panchayat and Thillankeri (7) in Kannur District Panchayat has been postponed. Votes will be counted on December 16.

Kerala recorded 76.38 per cent voter turnout in the 2nd phase of local body elections held in five districts, last week, according to the state election commission. 36,72,206 men, 38,51,350 women and 15 transgenders exercised their franchise.

Under the shadow of the COVID-19 pandemic, COVID-19 patients cast their votes in Kochi.Kerala recorded 76.38 per cent voter turnout in the second phase of local body elections held in five districts last week.