Dr Khan of Gorakhpur's BRDMCH Paediatrician Department's has been sacked after being found guilty in the probe into the circumstances leading to the death of children in the hospital, UP Principal Secretary (Medical Education) Alok Kumar said. 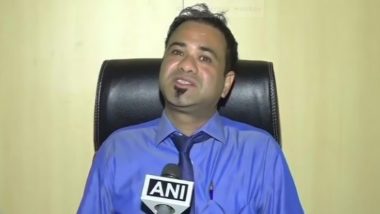 Lucknow/Gorakhpur, Nov 11: Doctor Kafeel Khan of Gorakhpur's BRD Medical College and Hospital, who had been suspended in 2017 after the death of 70 children due to lack of oxygen supply to the hospital, has been dismissed, a senior government official said here on Thursday.

Dr Khan of Gorakhpur's BRDMCH Paediatrician Department's has been sacked after being found guilty in the probe into the circumstances leading to the death of children in the hospital, UP Principal Secretary (Medical Education) Alok Kumar said.

As the matter is sub judice, the detailed information about Dr Khan's dismissal will be given to the court, Kumar added.

Dr Khan had been attached to the office of Director General Medical Education (DGME) after his suspension on August 22, 2017 in the wake of the children's death during the month. Gorakhpur Hospital Tragedy: Jan Swasthya Abhiyan Appeals UP CM Yogi Adityanath to Release Dr Kafeel Khan

Reacting to the report of Dr Khan's dismissal, Congress general secretary Priyanka Gandhi Vadhra termed his dismissal as malice-driven and aimed at harassing him.

Expressing surprise over the reports of his dismissal, Dr Khan, said he does not know how he has been terminated despite the court giving him a clean chit earlier.

“Principal Secretary Alok Kumar had on Wednesday released a statement about my termination from the BRD Medical college,” he said, adding he, however, has not received any termination letter as yet.

"They have no authority to terminate me. They should have taken orders from Uttar Pradesh Public Service Commission (UPPSC) (to suspend me),” he asserted in a statement on the reports of his termination.

"Among the eight people suspended in the lack of oxygen case in the hospital, the suspension of seven others except mine had been revoked. The court had punished all of them in one or the other manner but the honourable court had given me a clean chit on charges of medical negligence and corruption," Dr Khan claimed.

“When I was in jail, the UP government again set up an inquiry against me on February 24, 2020, and on August 6, 2021, the state government declared in front of the court that they are withdrawing the inquiry order of the then Chief Secretary Himanshu Kumar,” Dr Khan said.

He also explained that even on Wednesday, the government had not told the court about his termination.

“On November 10, 2021, there was a date in the court but the government did not submit any papers regarding termination. The next court date is on December 7, 2021. I have no hope of justice from this government,” Dr Khan added.

After Kafeel's dismissal, Congress general secretary Priyanka Gandhi in a tweet in Hindi said "Dr Khan's dismissal is driven by malice. Motivated by a hate agenda, the government is doing all this to harass him."

"But the government should keep in mind that it is not above the Constitution. The Congress party is with Dr Khan in his fight for justice," she said.