However, an Agriculture Department official has asserted that very few locusts have arrived here. 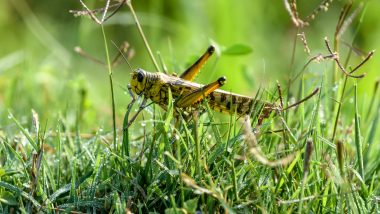 Bhatinda, July 3: Some areas of Punjab's Bathinda district--Talwandi Sabo, Rampura and Maur Mandi were attacked by locust swarms on Thursday. However, an Agriculture Department official has asserted that very few locusts have arrived here.

"Very few locusts have come here. They were not in a condition to damage crops as they had already been sprayed on. Arrangements are in place to control locusts," said Kamal Jindal, Officer, Agriculture Department. Locust Attack: Delhi Govt Issues Advisory as 'Tiddi Dal' Reaches NCR Outskirts, DMs Tasked to Ward Off Threat.

On the other hand, according to the farmers, vegetable crops have been damaged by the locusts. The farmers tried to get rid of the crop-munching insects by making noise via tractors.

"The locusts have arrived here, we tried to get rid of them by making noise via tractors. No official arrived here. Our vegetables have been damaged," said Vinay Kumar, farmer.