Year Ender 2020: Wildfires, Cyclones, Floods, Locust Swarms and More, 10 Deadliest Natural Disasters From Across the World That Definitely Made It An Apocalyptic Year!

Wildfires that ravaged Australia and the Western US, tropical cyclones in India and other parts, locust swarms, floods, and more, we experienced many things in 2020. As we are finally prepared to bid farewell to probably one of the most challenging years in recent times, in this article, we look at the deadliest natural disasters that occurred this year. 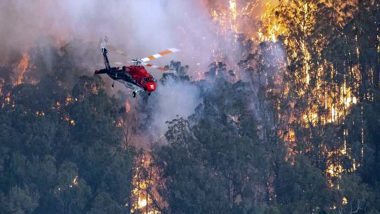 The year has come to an end. So many things have happened this year, not to mention the COVID-19 pandemic that redefined our lifestyles. This year has been a standout year for all the wrong reasons, including its devastating natural disasters that shook the world. Wildfires that ravaged Australia and the Western US, tropical cyclones in India and other parts, locust swarms, floods, and more, we experienced many things in 2020. The natural disasters made the struggle worse, as thousands of people lost their lives. Keeping everyone at the edge of their seats, waiting for what is to come next, the incidents surely made it an apocalyptic year. As we are finally prepared to bid farewell to probably one of the most challenging years in recent times, in this article, we look at the deadliest natural disasters that occurred in 2020.

The bushfires in Australia that began in October 2019 continued to grow fast and wide, create significant damages and show no signs of stopping. Also called as Black Summer, the Australian bushfires were deemed as one of the biggest natural disasters. The extent of damage reportedly ranged from an estimated 18 million hectares, burned over 9000 buildings and homes destroyed and about 400 deaths and some endangered species were believed to be driven to extinction.

The fires did not only occurred in the Australian forests. Wildfires took an enormous toll on western US communities, both from flames and harmful smoke. California bore the worst of it. Thunderstorms ignited numerous wildfires across California, Oregon and Washington, followed by additional ignite across the West Coast. The August Complex Fire alone burned more than one million acres, so far, the largest in California history. Five of California’s six largest fires burned this year, causing severe destruction.

3. Hurricane Laura in Louisiana, US

Hurricane Laura made landfall on the morning of August 27, 2020, near Cameron, Louisiana and became one of the strongest storms ever to hit the United States. Many people lost their lives, and the storm prompted mass evacuations.

Occurring in the early hours of January 1, overnight there was a heavy downpour which caused the rivers to overflow adding to the devastating flash floods that covered Jakarta and its neighbouring areas. According to reports, the flash floods and landslides killed many people and displaced hundreds. The flash floods again occurred in July, and it killed at least 16 people, displacing many in Indonesia.

5. Volcano Eruption in the Philippines

The Philippines routinely faces natural disasters from earthquakes to volcano eruptions. The tourist attraction, Taal, erupted, early in January, forcing hundreds of thousands to evacuate, covering the land in ash and killing reportedly over 30 people.

6. Cyclone Amphan in India and Bangladesh

The countries were hit by cyclone Amphan, which reportedly killed more than 85 people. Millions were evacuated due to the storm. Before making the landfall, the cyclone Amphan was the strongest storm ever recorded in the Bay of Bengal, but weakened considerably as it reached land.

While continuing to battle the COVID-19 pandemic, people faced severe catastrophic situations such as earthquakes that took place in many countries across the world. About 45 major earthquakes have been categorised over six degrees on the Richter scale. Jamaica and Russia faced earthquakes with a severe magnitude over seven on the Richter scale and were symbolically the worst-hit countries. In February this year, Uttarakhand in India faced an earthquake which damaged a few houses and leaving two people injured in Bageshwar district.

Forest fires have created an uproar in many countries across the world. In May, a forest fire that lasted for days had the state of Uttarakhand fuming with thick smoke. It managed to engulf 51 hectares of forest land, resulting in a loss of more than one lakh for the forest department. Two deaths were reported and several injured.

The northeastern state of India annually faces severe floods during the monsoon season. With no exception, heavy rains caused severe flooding in low-lying areas, destroying villages and districts. Humans and animals were forced to evacuate their homes to go to a safer place during the floods.

These are some of the worst natural disasters that occurred in this year. As we approach the end of the year, another possible disaster is likely in line. This powerful and complicated storm could hit the Upstate New York on Christmas 2020 eve with a dangerous combination of heavy rain, high winds and suddenly falling temperatures.

(The above story first appeared on LatestLY on Dec 23, 2020 06:07 PM IST. For more news and updates on politics, world, sports, entertainment and lifestyle, log on to our website latestly.com).