Get latest articles and stories on India at LatestLY. Researchers at Tamil Nadu's National Institute for Research in Tuberculosis (NIRT) and Indian Council of Medical Research (ICMR) found instances of reverse zoonosis (human-to-animal and animal-to-human) in the transmission of tuberculosis (TB). 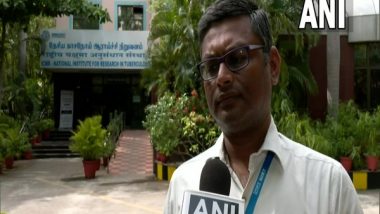 In an exclusive interview with ANI, Dr S Sriram of ICMR-NIRT said that there is a possibility and evidence of Tuberculosis transmission from animals to humans and vice versa.

"TB transmission happens through the aerosols that are generated from tuberculosis patients as it is an airborne disease. While our TB patient coughs or sneezes, or speaks, or sings, lots of aerosols are generated from the nose and oral cavity that aerosol gets expelled and that becomes the source of exposure for various other organisms including animals," Dr S Sriram said.

He further explained, "So, when animals like cattle or any other domestic animals that are at exposure to these aerosols, they have a possibility of getting infected with tuberculosis and also on the parallel there are some situations where we have documented evidence of reverse transmission from animals to human beings."

Research conducted by the ICMR-NIRT in Chennai found the presence of mycobacterium tuberculosis in animal handlers and animals.

Dr. Sriram said, "We have done studies in animal handlers in Chennai, where they have found that there is a presence of mycobacterium tuberculosis in animals and also the similar strains are found in the animal handlers who are working in those slaughterhouses. So, this gives us evidence for the transmission that happens between the human beings and animals."

He also said that there is a possibility of mycobacterium tuberculosis infection from unpasteurized milk.

Dr. Sriram recommended for consumption of pasteurized milk to avoid the risk of mycobacterium transmission.

He said, "So, that is why we recommend using pasteurized milk and if in certain places due to the culture and the availability of resources, they are not following these practices, then there is a risk of transmission of mycobacterium tuberculosis through these samples. So in the current context, there is also a lot of much interventions going on in terms of the prevention of mycobacterium in the animal world."

The Union Health Ministry's goals to eradicate TB by 2025 also include research on the environment and zoonosis.

According to Dr. Sriram, "Considering the goal of TB elimination by 2025, we need to have an understanding of where are the reservoirs for tuberculosis. So it may be in the environment or it may be in animals. It can be in domestic or wild animals. So, there is a lot of evidence where we have seen mycobacterium in wildlife like elephants. These are evidence that informs us that there is a transmission going on between non-human host."