Get latest articles and stories on India at LatestLY. Around one hundred Afghanistan Army officers stranded in India after falling of the Government in Kabul, staged protests outside Afghanistan Embassy in New Delhi on Thursday. 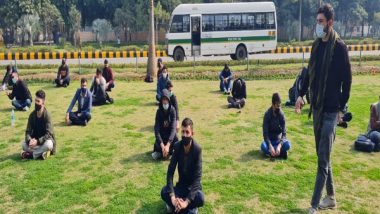 New Delhi [India], January 27 (ANI): Around one hundred Afghanistan Army officers stranded in India after falling of the Government in Kabul, staged protests outside Afghanistan Embassy in New Delhi on Thursday.

Protesters include officers from the Army, Special Forces and intelligence services. They demanded the intervention of the embassy in their rehabilitation in other countries as going back to Afghanistan is no more option for them.

Lieutenant Hamid, who came to India last year for training at National Defence Academy said that there is no clarity over the future of more than 200 Afghanistan Army officers staying in India.

"Afghan Army officers have come to India for training or medical treatment. After the fall of Government in Afghanistan, financial assistance to injured or ill officers undergoing treatment at various hospitals has been stopped in between, " he said.

He added that few officers have to sell their mobile phones to pay rent and arrange food. Their families in Afghanistan are also suffering due to the uncertainty looming over their future.

Another officer Major Mohammed said that they request United Nations to intervene and save them from getting killed if they were forced to go back to Afghanistan.

"We can't go back. Taliban has all of their details including biometric details. We have tried to contact Afghanistan Embassy several times but every time they give us the next date but never resolve the issue," he said.

Protesters claimed that due to lack of money, fifteen people are forced to live in two small rooms in South Delhi.

Another officer who wished not to be identified said that he has not seen his children for the last year.

"I don't know if I will ever meet my family again. My family is suffering because of me. No one is listening to us. United States, UN and another world forum should listen to grievances of people like us, who have no future," he added.

On August 15, the Afghanistan government collapsed after the Taliban took over Kabul. (ANI)