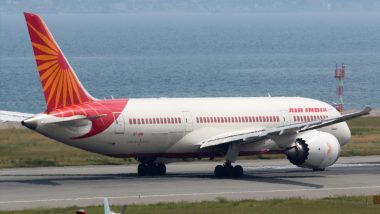 New Delhi, January 27: The Centre on Thursday handed over the management control of national carrier Air India to a subsidiary of Tata Sons. With this Air India's strategic disinvestment was complete after the Centre received a consideration of Rs 2,700 crore from the 'Strategic Partner' -- Talace -- which is a wholly owned subsidiary of Tata Sons.

The strategic disinvestment transaction of Air India successfully concluded today with transfer of 100% shares of Air India to M/s Talace Pvt Ltd along with management control. A new Board, led by the Strategic Partner, takes charge of Air India. pic.twitter.com/wd5ZcUFomI

On Thursday, Tata Sons Chairman N. Chandrasekaran called on Prime Minister Narendra Modi in Delhi ahead of the official handover of Air India. Afterwards, at 'Airlines House', the HQ of Air India, a new board was constituted which included Tata Group's executives.

"We are excited to have Air India back in the Tata Group and are committed to making this a world-class airline," Chandrasekaran said. "I warmly welcome all the employees of Air India, to our Group, and look forward to working together."

Tata Sons' subsidiary Talace had emerged as the highest bidder for the national carrier under the divestment process. It had quoted an enterprise value of Rs 18,000 crore for 100 per cent equity shareholding of the Centre in Air India along with that of Air India Express and AISATS. On its part, the Centre had stipulated a reserve price of Rs 12,906 crore.

(The above story first appeared on LatestLY on Jan 27, 2022 05:14 PM IST. For more news and updates on politics, world, sports, entertainment and lifestyle, log on to our website latestly.com).