Seeking disqualification of TMC leader Mukul Roy as a member of the West Bengal Legislative Assembly from the Krishnanagar Uttar Assembly Constituency, BJP MLA and Leader of Opposition in the West Bengal Assembly Suvendu Adhikari sent a petition to Speaker Biman Banerjee on Friday. 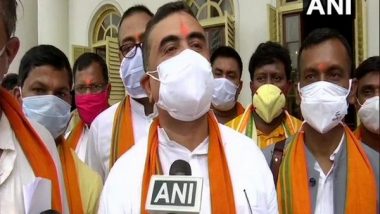 "Respected Sir, Petition for Disqualification of Sri Mukul Roy, Member of Legislative Assembly from 83, Krishnanagar Uttar Assembly Constituency is enclosed herewith. I request you to dispose of the same as soon as possible. Please acknowledge receipt of the same," read the petition.

Earlier, Adhikari had demanded Roy's resignation under the anti-defection law, pointing out that the latter joined the TMC despite winning the assembly polls from the Krishnanagar Uttar assembly constituency on a BJP ticket.

On June 15, addressing reporters Adhikar had said, "Todna-Jodna is part of TMC's dirty politics. They have been doing this for the past 10 years and nobody opposed it. But it is being opposed now and action will be taken under the anti-defection law."

"The work will be done under the anti-defection law, whoever wants to go should resign from the post of MLA. I will send a letter to the speaker in 24 hours and wait for 15 days, after which we also have options of the High Court and the Supreme Court," he added.

Earlier in the day, 50 BJP MLAs headed by Suvendu Adhikari handed over a memorandum to West Bengal Governor Jagdeep Dhankhar.

"50 MLAs of Opposition including Suvendu Adhikari have handed over a memorandum to me, attracting my attention towards four points including anti-defection law and incidents of Tiljala and Chandan Nagar," West Bengal Governor Jagdeep Dhankhar had said.

"Being the Constitutional head of the state, let me make it clear that anti-defection law is applicable in full force in Bengal. It is as much applicable here as in other parts of the country," added the Governor.

The BJP lost the polls but emerged as the second-largest party with 77 seats in the 294-member West Bengal Assembly. Trinamool Congress registered a landslide victory winning 213 seats. (ANI)