Twenty-five Covid patients in Delhi's elite Sir Ganga Ram Hospital died in 24 hours and the lives of many more hung in precarious balance on Friday, the scramble for life-saving oxygen getting more frantic in hospitals across the national capital and its suburbs as the day progressed. 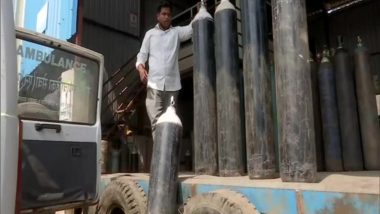 New Delhi, April 23: Twenty-five Covid patients in Delhi's elite Sir Ganga Ram Hospital died in 24 hours and the lives of many more hung in precarious balance on Friday, the scramble for life-saving oxygen getting more frantic in hospitals across the national capital and its suburbs as the day progressed.

Sources said “low pressure oxygen” could be the likely cause of the deaths in Ganga Ram, one of the city's biggest and most high-profile hospitals, where healthcare staff was reduced to manually ventilating patients in its ICU and emergency department. The hospital announced the deaths shortly after 8 am. Rajasthan Govt Accuses Centre of 'Bias Attitude' in Supplying Oxygen as COVID-19 Numbers Rising Each Day.

After the unprecedented crisis of the morning, an oxygen tanker did reach Ganga Ram in central Delhi at 9.20 am but it was enough only for about five hours depending on consumption, an official at Ganga Ram said. Till evening, there was no further replenishment and a hospital spokesperson said they were awaiting supplies. “It is wrong to say the deaths occurred due to oxygen shortage. We provided oxygen to patients manually when the pressure dipped in the ICU,” SGRH Chairman Dr D S Rana said.

As hospitals big and small counted in hours and sometimes minutes how much oxygen supply they had left, changing the timeframe depending on the erratic supply and and giving updates on social media platforms, Delhi Chief Minister Arvind Kejriwal made an impassioned appeal to Prime Minister Narendra Modi.

"People are in major pain due to oxygen shortage. We fear a big tragedy may happen due to oxygen shortage and we will never be able to forgive ourselves. I request you with folded hands to direct all CMs to ensure the smooth movement of oxygen tankers coming to Delhi," he said at a Covid meet chaired by Modi.

The Centre should take over all oxygen plants through the Army and every truck should be accompanied by an Army escort vehicle, he suggested. "The oxygen supply scheduled to come to Delhi from Odisha and West Bengal should either be airlifted or brought through the Oxygen Express started by the Centre," Kejriwal added.

Minutes after the PM's meeting with high burden states ended, Railway Board chairperson Suneet Sharma said the Delhi government had requested that 'Oxygen Express' trains be operated to save COVID-19 patients gasping for breath in the city's hospitals.

Delhi is the fourth state after Uttar Pradesh, Madhya Pradesh and Andhra Pradesh which has lined up for 'Oxygen Express' services, Sharma said.

Chairing the high-level meeting, the prime minister said every state should ensure that no oxygen tanker, irrespective of its destination, is stopped or gets stranded, a statement said.

Modi also said the Railways and Air Force have been deployed to reduce the travel time of oxygen tankers and assured states of the Centre's full support in the fight against the pandemic.

While government leaders strategised on how to overcome the crisis, Ganga Ram Chairman Rana verbalised the demand of all city hospitals, struggling to replenish their oxygen stocks for the last four days in the face of the explosion in the number of COVID-19 cases.

"All we need is uninterrupted and timely supply of oxygen,” he said. More than 500 coronavirus patients, including around 150 on high flow oxygen support, are admitted in his hospital.

"Ventilators and BiPAP machines are not working effectively. Lives of another 60 'sickest' patients at risk. Major crisis likely," a senior official at the hospital said.

The oxygen emergency was mirrored at the Max Hospitals and other healthcare facilities. Though no deaths were reported, Max Healthcare sent out an SOS on Twitter at 7.43 am, saying that Max Smart and Max Hospital Saket had less than an hour of oxygen left for the about 700 patients admitted.

“Awaiting promised fresh supplies from INOX since 1 am… over 700 patients admitted, need immediate assistance,” it said, tagging the Prime Minister's Office, the Union Health Minister and Kejriwal among others.

About two hours later, at 9.35 am, it put out an update that it had received emergency supplies that would last another two hours and was waiting for more.

Outside the hospitals, too, despair escalated. Ambulances could be seen lined up. Patients waited on stretchers and inside vehicles, some visibly gasping for breath, and family members and friends desperately tried to get their loved ones a bed and treatment. But that was a tall order for a healthcare machinery stretched to its absolute limits.

On Thursday, Delhi recorded 306 COVID-19 deaths and 26,169 cases with a positivity rate of 36.24 per cent, the highest since the pandemic began a year ago. City hospitals grappled with depleting oxygen supply and some requested the Delhi government to transfer patients to other facilities.

At the GTB Hospital, reports said CCTV cameras would be put up so doctors inside could monitor the situation outside. At 4.20 pm, the Indian Spinal Injuries Centre in Vasant Kunj posted on Twitter that it was left with only one hour of oxygen and asked for help at the earliest. "… We have been waiting for the supply since last night, but no luck so far," it said.

Artemis Hospital in Gurgaon abutting Delhi put out a similar appeal and tagged an earlier post saying it was running out of time. “Artemis Hospital still awaits for Oxygen Supply! Barely any Oxygen left with us. We request the government to fulfill our request and help us save lives,” it said at 5.06 pm.

And sources at the Holy Family Hospital in south Delhi's Okhla area told PTI they had received emergency oxygen supply from the Delhi government but the "stock can last for six hours". Elsewhere in the city, the Dwarka-located Aakash Healthcare said it managed to refill their cylinders through small vendors across the city.

While some hospitals have managed to make short-term arrangements, there is no immediate end to the crisis in sight, a government official had said on Thursday. Faced with a staff shortage and resource crunch, the All India Institute of Medical Sciences also discontinued contact tracing of exposed healthcare workers and quarantine of asymptomatic contacts. Only symptomatic healthcare workers will be tested and only those testing positive will be isolated and managed as per the clinical condition.

The decisions were taken at a review meeting held under the chairmanship of AIIMS Director Randeep Guleria on Thursday.