Reacting over allegations of rape on his son, Rajasthan Minister Mahesh Joshi on Monday advocated for a strict probe into the matter and said that he will always stand with the truth and justice. 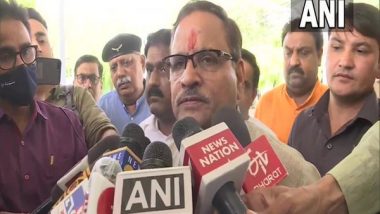 Jaipur, May 9: Reacting over allegations of rape on his son, Rajasthan Minister Mahesh Joshi on Monday advocated for a strict probe into the matter and said that he will always stand with the truth and justice.

"The media has informed us that a report has been registered. Police must probe strictly and in-depth. I will always stand with truth and justice in this matter or any other matter. Without any media trial, let the police do their work," Rajasthan Minister told media persons. Rajasthan Minister Mahesh Joshi’s Son Rohit Accused of Raping Woman From Jaipur; Delhi Police Files Zero FIR.

The girl alleged that she has also been assaulted. She was in touch with the accused for a long time. The victim has alleged that the accused has her obscene photos and videos which he recorded while she was in an unconscious state.

"On 3 and 4 September 2021, I came to Delhi for an interview. The accused had already reached Delhi. He booked a room for me in a hotel and showed us as husband-wife. He promised me that he would marry me. After this, he raped me on many occasions and filmed it. He had threatened me with dire consequences if I dared to spill the beans. He told me that he is getting a divorce from his wife and that he would marry me. On many occasions, he thrashed me badly and forced me to dance. It was a huge trauma," the victim has stated in the FIR.

Meanwhile, the police also came to know that the accused had made an affidavit in which the victim has stated that both are major and have made physical relations of their own will.