Karan Johar Shares an Unseen Picture of Yash Johar and Yash Chopra, Calls Them His ‘Strength’ 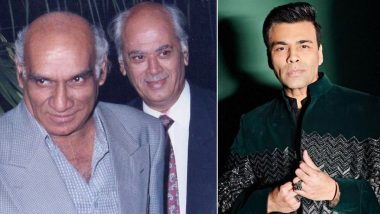 Director Karan Johar on Saturday shared an unseen picture featuring the legendary filmmakers Yash Johar and Yash Chopra in a single frame. Taking to his Instagram handle, Karan shared a throwback snap of the late legendary duo and captioned it as, "The Yash factor In my life for life! #mystrength." Bigg Boss OTT: Karan Johar Says ‘Don’t Take That Tone With Me’ to Divya Agarwal After She Irks the Host (Watch Video).

For the unversed, Karan is the son of late filmmaker Yash Johar, the founder of Dharma Productions, and nephew of National film award-winning director Yash Raj Chopra, the founder of Yash Raj Films. Kjo is now the owner of Dharma Productions which was founded by his late father in 1976, with its first production venture titled 'Dostana' starring Amitabh Bachchan. Whereas, Yash Chopra's son Aditya Chopra is currently the owner of Yash Raj Films which was founded in 1970. Free: Karan Johar Announces Film on Sri Sri Ravi Shankar on the Occasion of the Spiritual Leader's Birthday!