Commenting on the competitive landscape and brand strategies, Research Analyst Shilpi Jain said the anti-China sentiments largely subsided by the end of the year, with Chinese brands holding 75 per cent market share in 2020. 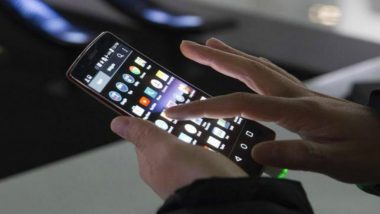 New Delhi, January 27: India's smartphone shipments declined by a modest 4 per cent to over 150 million units in the pandemic-hit 2020 on the back of high consumer demand post-lockdown and new use cases like work from home, research firm Counterpoint said. The smartphone market grew 19 per cent year-on-year in the December 2020 quarter, as the festive season offers got extended due to Diwali falling on November 14, when compared to the year-ago period.

"The high consumer demand post-lockdown, as well as strong promotions on online channels and new uses cases like e-learning and work from home, drove the smartphone market in the pandemic-hit year," it said.

Xiaomi (including POCO) reclaimed the number one spot for the December quarter as well as the full year with 26 per cent market share. Samsung ranked second (21 per cent), followed by Vivo (16 per cent), Realme (13 per cent) and Oppo (10 per cent) in the fourth quarter of 2020. Sony Xperia Pro 5G Smartphone Launched in the US for $2,499.

The ranking remained same on a full-year basis as well with Samsung grabbing 20 per cent share, Vivo (15 per cent), Realme (11 per cent) and Oppo (10 per cent). Apple captured the sixth spot in the fourth quarter of 2020 with 171 per cent y-o-y growth and 93 per cent growth in 2020 over the previous year.

"The launch of the iPhone 12, aggressive offers on the iPhone SE 2020 and iPhone 11, and online expansion drove this growth. For the first time, the brand crossed 1.5 million shipments in a single quarter," the research firm said.

"The Indian smartphone market maintained its momentum in Q4 2020 after a record-breaking third quarter. As Diwali was in mid-November this year, we witnessed high shipments during October as well. The overall market crossed 150 million units in 2020 driven by high consumer demand post-lockdown," Counterpoint Research Senior Research Analyst Prachir Singh said.

Multiple new use cases such as online education, as well as increased content consumption, were the major factors for the high consumer demand, Singh added.

"Going forward, we believe that this demand will grow further as more people transition from feature phones to smartphones and feature-rich devices, diffusing towards lower price tiers," he said. Samsung Galaxy M02 Launching Next Week, Likely to Be Priced Below Rs 7,000.

The year 2020 brought unexpected changes in the Indian smartphone industry due to COVID-19, anti-China sentiments and developing manufacturing ecosystem. The year also saw the re-entry of Indian brands like Micromax. With its newly launched IN-series smartphones, Micromax has reached its highest market share in six quarters.

With Indian brands revamping their portfolios, and Jio coming up with an entry-level 4G smartphone, 2021 will be a significant year for Indian brands and we expect their share to increase, Counterpoint said.

In 2020, 5G smartphone shipments crossed 4 million units in India. These shipments were driven by two brands – OnePlus, the only brand with a 100 per cent 5G portfolio, and Apple, which launched the iPhone 12 series with 5G connectivity.

Going forward, 5G smartphone shipments are expected to increase by more than nine times to reach 38 million units in 2021, Counterpoint said. Commenting on the competitive landscape and brand strategies, Research Analyst Shilpi Jain said the anti-China sentiments largely subsided by the end of the year, with Chinese brands holding 75 per cent market share in 2020.

"During the year, we saw innovative channel strategies from leading brands due to changed consumer behaviour in the wake of COVID-19. Offline-centric brands such as Samsung, Vivo and OPPO increased their online presence...Indian brands are looking to expand their market share by leveraging the PLI scheme," Jain said.

Transsion Group brands (Itel, Infinix and Tecno) kept the momentum in the fourth quarter of 2020 as well, registering their highest-ever shipments in a single quarter at over 9 million units. Transsion brand remained strong in tier III and IV cities, and rural India, while Itel remained the top feature phone brand in the quarter, it added.