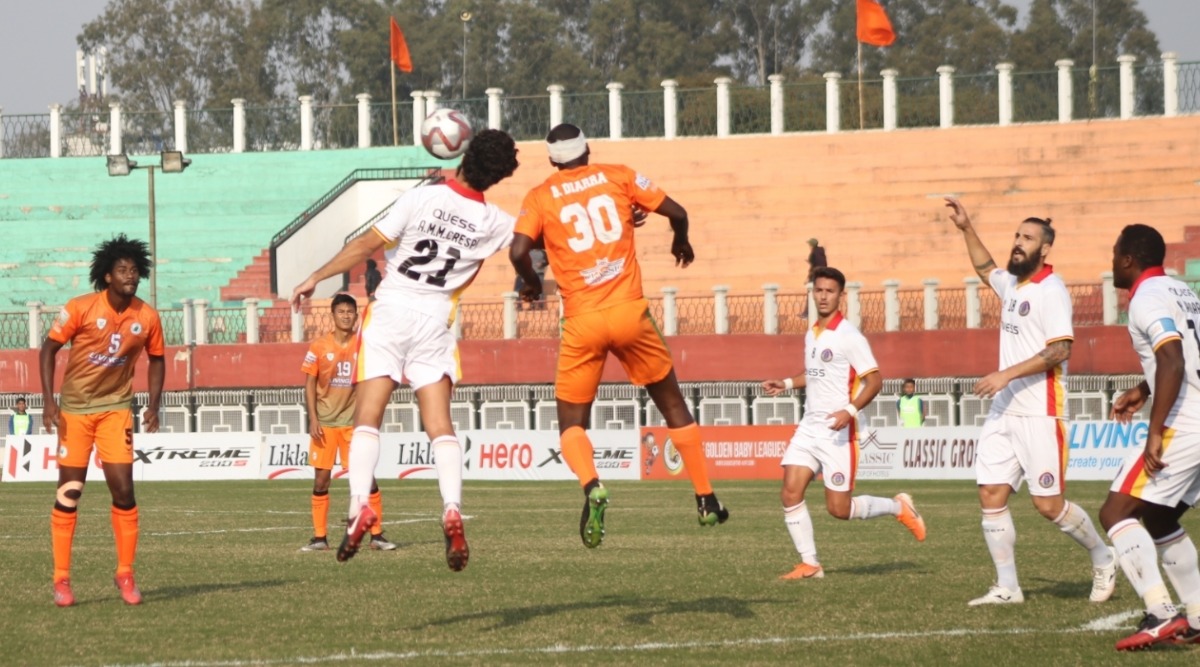 Imphal, Dec 10: East Bengal earned their first win of this I-League season by outplaying Neroca FC 4-1 in front of a heart-broken 20,000 crowd at the Khuman Lampak Stadium here on Tuesday. Jaime Colado (21st and 52nd) converted twice from the penalty spot while Juan Mera (33rd) and Marcus Espada (65th) also found the target. Bou Bacar Diara scored the consolation goal for the 'Oranges' in the 31st minute.

The determination of the red and gold brigade was evident right from the start. First, Juan Mera's cross just eluded Santos Colado and within the next few seconds, Santos' cross was headed by Marcos, but feebly, posing no problem for Neroca keeper Marvin Philip. In the 19th minute, the ball seemed to have found the back of Neroca net after the last touch by Taryk Sampson but it was disallowed by the referee later.

In the very next minute, Juan Mera was brought down by Shaikhom Ronald Singh inside the penalty box and the referee pointed to the dreaded spot without any hesitation. Colado stepped up and made no mistake in giving the visitors the lead. Gift Raikhan's side, having fallen behind, pressed hard in pursuit of an equaliser and were duly rewarded not long after.

In the 31st minute, Taryk's long pass found Chanso Horam who did well to keep the ball in play and squeezed in a perfect cross for Bou Bacar Diara, who just tapped in the ball home for Neroca to draw the parity. The game kept turning on its head, as it was East Bengal who regained their lead just two minutes later. Marcos was brought down just on the edge of the Neroca penalty box and Colado scored from the free-kick.

Just seven minutes after the resumption, a handball by a Neroca player inside the penalty box from a move by Espada gave the red and golds another spot-kick, which was converted by Colado again, making it 3-1 for the Kolkata outfit.

In the 65th minute, Pintu Mahata's cross beat an outstretched Marvin Philip to find an unmarked Marcus, who headed in an easy goal to further extend East Bengal's lead to 4-1.

Minutes later, East Bengal had a chance for their fifth goal, when Abhishek Ambekar's powerful shot was blocked by Marvin Philip.

After Tuesday's win, East Bengal climbed to the third spot with five points from three matches, while Neroca stay at the seventh spot with three points.