Benzema is still in search of that first goal since being recalled to the France squad after a six-year exile as he continues to struggle to find openings in the final third. 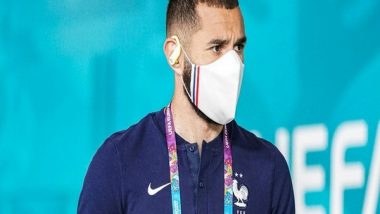 Budapest, June 20: France head coach Didier Deschamps insists Karim Benzema still has his confidence after his team's draw with Hungary at the Puskas Arena on Saturday in ongoing Euro 2020. Benzema is still in search of that first goal since being recalled to the France squad after a six-year exile as he continues to struggle to find openings in the final third.

"Benzema has a lot of experience and he will have no doubts about himself", Goal quoted Didier Deschamps as saying in the post-match press conference. "He has done very good things, but he has lacked a goal. He knows people want him to score, but he knows it is just about that. He is a striker that needs to score but the essential thing is that he has confidence and that he knows he has mine." UEFA Euro 2020 Points Table Updated: Portugal Lose to Germany, Battle for Round of 16 Gets Intense.

Les Bleus missed the chance to book their Round of 16 berth in the Euro 2020 as they were held to a 1-1 draw against Hungary. Didier Deschamps' men currently have four points after two games, which should be enough to make the last 16 as they finish their group stage against Portugal on Wednesday, a repeat of the 2016 European Championship final.

Deschamps also gave an update on Dembele who was withdrawn early in the second half against Hungary due to an injury. "He's been hit on the tendon, behind the knee, it will be necessary to check," he said. "He continued for a bit, he wanted to cross and felt a fairly significant discomfort. I brought him off. It will be necessary to keep an eye on it," the French coach said.