India vs West Indies ODI and T20I Series Likely to Be Played in Kolkata, Ahmedabad

Get latest articles and stories on Sports at LatestLY. The upcoming white-ball series between India and West Indies is likely to be played across two venues -- Kolkata and Ahmedabad. 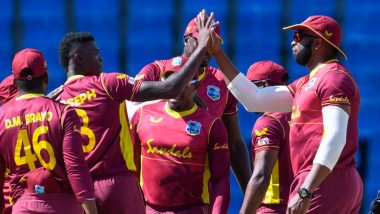 New Delhi, January 19: The upcoming white-ball series between India and West Indies is likely to be played across two venues -- Kolkata and Ahmedabad. This might happen looking at the COVID-19 situation in the country. The proposal has been made by the BCCI's Tours, Fixtures, and Technical Committee and the board will now take the final call.

Sources in the know of developments confirmed to ANI that the Tours and Fixtures Committee indeed had a meeting on Wednesday, and they deliberated on how to proceed with the series.

"The BCCI's Tours, Fixtures and Technical Committee had a meeting today and they discussed the COVID-19 situation in the country and how the West Indies series should possibly go ahead. They have up come up with a plan of playing three ODIs and three T20Is across two venues -- Kolkata and Ahmedabad," the source said. SA vs IND, 1st ODI 2022 Match Result: Temba Bavuma, Rassie van der Dussen and Bowlers Help Hosts Register 31-Run Win.

"The proposal is to have three ODIs at one venue and the T20Is at another. The committee has sent the proposal to the BCCI and now the final decision will be taken by the board," it added.