Juventus manager Maurizio Sarri said that it was an intense year but his side gave everything they had after the club sealed ninth successive Serie A title. 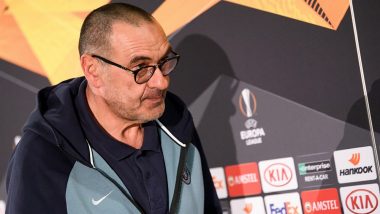 Turin, July 27: Juventus manager Maurizio Sarri said that it was an intense year but his side gave everything they had after the club sealed ninth successive Serie A title. Juventus registered a 2-0 win over Sampdoria here on Monday to claim the Serie A title.

"We started a new path, with a new philosophy: we continued to give everything we had, in a complicated year even off the pitch. It was a difficult time for everyone, and it was also starting again," the club's official website quoted Sarri as saying.

"We wanted it, we suffered and we brought out everything we had to satisfy us, the club, the fans, and those who greeted us in recent months and looked at us from above. An intense year, but we have confirmed to be a team made up of great men," he added. Juventus Secure Ninth Straight Serie A Title Following 2–0 Over Sampdoria (Watch Goal Highlights).

Cristiano Ronaldo scored at the end of the first half to hand the Bianconeri the lead. Federico Bernardeschi's second-half effort doubled Juventus' advantage over Sampdoria.

Juventus now have 83 points at the top of the Serie A table with a seven-point lead over the second-placed club, Inter Milan. They will next take on Cagliari on July 30.