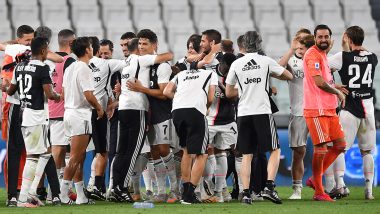 It was a long season for Juventus and manager Maurizio Sarri but the Black & Whites have finally got over the finishing line as they lifted their ninth straight Serie A title after 2-0 win over Sampdoria. This is also Sarri’s first-ever domestic league title as a football manager. The Bianconeri’s secured the title with two games left in the season after having returned last month from a coronavirus enforced suspension. Fans Relive Cristiano Ronaldo’s Insane Header Ahead of Juventus vs Sampdoria, Serie A 2019-20 (Watch Video).

With Inter Milan winning their game against Genoa, Juventus knew that a victory against Sampdoria will deliver them yet another domestic league title and the Bianconeri’s did just that. Maurizio Sarri’s men have been underwhelming in recent weeks, but a dominant display on Sunday saw them secure their ninth straight Serie A crown. Ecstatic Manchester United Fans React After Red Devils Beat Leicester 2–0 to Finish Third in Premier League 2019–20 and Secure Champions League Football.

Cristiano Ronaldo netted in the dying minutes of the first half to take his tally to 31 goals in the Italian league season and give his side an important lead at the interval. The Portuguese missed a chance to secure all three points as he missed a crucial penalty but the title was confirmed when Federico Bernardeschi scored past the hour mark.

This was Juventus’ first title under their new manager and though it has been a testing season for the Bianconeri’s their Italian boss was over the moon after arguably the greatest feat of his coaching career. ‘It has a special feeling, of course. I told them, if you won with me who has never won anything, you must be really good!’ said the 61-year-old.

(The above story first appeared on LatestLY on Jul 27, 2020 08:25 AM IST. For more news and updates on politics, world, sports, entertainment and lifestyle, log on to our website latestly.com).