Get latest articles and stories on Sports at LatestLY. Jose Mourinho on Wednesday became the first coach to win all three current men's UEFA club trophies. 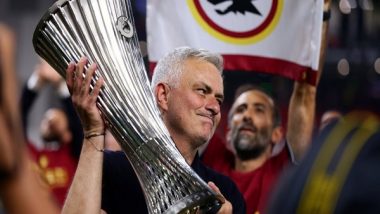 Roma defeated a feisty Feyenoord side in Tirana to claim the inaugural UEFA Europa Conference League title and become the first Italian team to win a European club competition since 2009/10.

The AS Roma's win makes Mourinho the only coach in European history to have won the Champions League, Europa League, and, now, the Conference League.

Mourinho has contested five European finals at Porto, Internazionale, Manchester United and Roma and, with Wednesday's win, he has taken home the trophy five times to maintain his perfect record. (ANI)