The Uruguay striker, Barcelona's third all-time scoring leader, joined rival Atlético Madrid after being told by Koeman that he wasn't wanted anymore. Koeman arrived after Barcelona's embarrassing 8-2 loss to Bayern Munich in the quarterfinals of the Champions League, which capped the team's first season without a title since 2007-08. 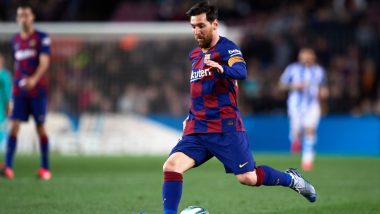 Madrid, September 30: Barcelona coach Ronald Koeman praised Lionel Messi on Wednesday for making a call for unity at the embattled club. Koeman's comments came after Messi told the daily Sport newspaper that he wanted to put his dispute with the club behind him and said “we must unite” to help Barcelona succeed again. Also Read | IPL 2020: Sanju Samson Says 'Not Thinking About India Berth, Focussed on Rajasthan Royals'.

“It's positive when the captain of the team calls for unity,” Koeman said. “It's very positive. Hopefully things will be calmer now than they were recently.” Also Read | Shah Rukh Khan Watches the Proceedings of RR vs KKR, IPL 2020, Enjoys the Game With Son Aryan (See Pics).

Messi was forced to stay at Barcelona after telling the club he wanted to leave in the offseason. He openly criticized the club and its officials after having his request to leave denied. Koeman said he will try to make Messi happy by making the team competitive.

“We have to find the best team for him, the best position for him, so he can shine and perform at his best," Koeman said. "You can tell that he lives for football and is always trying to win, even in the practice sessions. The best way to make Leo happy is to win matches.”

Barcelona visits Celta Vigo on Thursday for its second Spanish league match. It routed Villarreal 4-0 on Sunday, with Messi scoring one of the goals. The Argentina great told Sport on Tuesday that the only way for the club to reach its goals was to keep “united and rowing in the same direction.”

“After so many disagreements, I would like to put an end to it all,” he said in the interview that was published in its entirety on Wednesday. “We must unite as Barcelona fans and believe that the best is yet to come.” Messi had been critical of the club throughout last season, and accused president Josep Bartomeu of not keeping his promise to let him leave at the end of the season. He recently criticized the club for how it handled Luis Suárez's exit.

The Uruguay striker, Barcelona's third all-time scoring leader, joined rival Atlético Madrid after being told by Koeman that he wasn't wanted anymore. Koeman arrived after Barcelona's embarrassing 8-2 loss to Bayern Munich in the quarterfinals of the Champions League, which capped the team's first season without a title since 2007-08.

Messi sent a message to club members and fans, saying that he always meant the best for the club. “I'll take responsibility for my mistakes,” he said. “If they happened, it was with the intention of making Barcelona better and stronger.”