"It was a dream to imagine he could be with us next season. But hey, that didn't happen. I hope he likes where he plays." 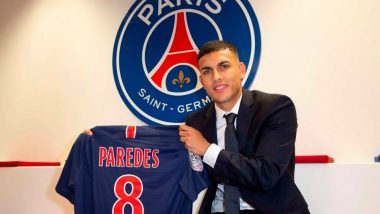 Barcelona, July 18: Lionel Messi joining Paris Saint-Germain was a 'dream', believes Leandro Paredes, as the deal for his Argentina team-mate 'didn't happen'. On Wednesday, it was reported that Argentina striker Lionel Messi is all set to sign a new five-year contract with Spanish club Barcelona. Along with signing a new deal, Messi will also be taking a 50 percent wage cut, reported Goal.com.

"Yes, there was a lot of talk at the club when it emerged that Leo could come to Paris," the PSG midfielder Paredes told ESPN. "It was a dream to imagine he could be with us next season. But hey, that didn't happen. I hope he likes where he plays."

Messi has spent his entire career with Barcelona after signing on with the club in 2004. His contract expired in June this year, but he is now set to sign a new deal with the Catalan side. The striker who is fresh from lifting the Copa America title with Argentina earned EUR550 million (£468m/$650m) over the course of his last five-year contract at Camp Nou, which equates to around EUR75m (£64m/$89m) per season. Lionel Messi Finds It Difficult To Leave Restaurant After Being Surrounded by Fans in USA, Watch Video.

Earlier, the likes of Paris Saint-Germain, Manchester City, and Inter Milan had all shown interest in signing Messi. If Messi indeed signs a new deal with Barcelona, then he will stay with the club until 2026 and by then, he will be 39.