Lionel Messi Finds It Difficult To Leave Restaurant After Being Surrounded by Fans in USA, Watch Video

The six-time Ballon D'Or winner, who is currently in Miami on a holiday, had a hard time getting out of a restaurant after being mobbed by fans. He eventually managed to get out free from the crowd. 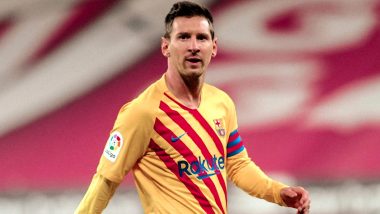 Argentina and Barcelona captain Lionel Messi was surrounded by loads of fans while he was leaving a restaurant with his family in Miami, United States of America on Friday. Messi is currently holidaying with his family in the USA after leading Argentina to the Copa America 2021 title days ago. In a video which has gone viral, he is seen mobbed by his fans and according to reports, the crowd wanted to take a picture with the star player. He was finding it difficult to even move amidst the crowd and he eventually is seen getting freed from the mob. Lionel Messi Surprises a 100-Year-Old Fan With a Video Following Copa America 2021 Win (Watch Video)

Lionel Messi getting mobbed in Miami, Florida. This via TNT Sports. pic.twitter.com/YFkagjAzJ9

Messi has had a last few months to remember as he played a crucial role in Argentina's ascension to South American supremacy. He starred with four goals and five assists to become the best player of the tournament. Most importantly, he delivered Argentina their first major international trophy after 28 years. Messi's holiday in the US is bound to raise speculations about the Argentine's next possible destination with many rumours linking him with a move to the Major League Soccer (MLS).

However, there has been numerous reports stating that he is close to new deal with Barcelona and has also accepted a 50% paycut owing to the club's financial problems. Barcelona president Joan Laporta is confident he would get Messi to put pen on paper. The Barcelona star is also a leading candidate to win this year's Ballon D'or.

(The above story first appeared on LatestLY on Jul 17, 2021 06:57 PM IST. For more news and updates on politics, world, sports, entertainment and lifestyle, log on to our website latestly.com).