Addressing the Indian community in Berlin, Prime Minister Narendra Modi on Monday said that of the total real-time digital payments that took place throughout the world in 2021, 40 per cent took place in India. 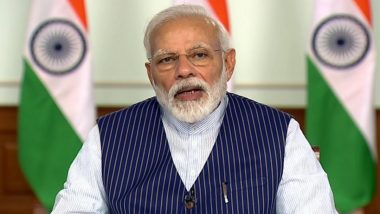 Berlin [Germany], May 3: Addressing the Indian community in Berlin, Prime Minister Narendra Modi on Monday said that of the total real-time digital payments that took place throughout the world in 2021, 40 per cent took place in India.

PM Modi was highlighting the work done by his government in integrating the use of technology with governance.

Also Read | Russia-Ukraine War: Blasts Rock Moldova As Fears Rise That Vladimir Putin Could Be Eyeing Next Target for Invasion.

"The way technology is being included in governance in India shows the new political will of the new India as well as is the proof of democracy's delivery capacity," PM Modi said.

The Prime Minister in his address to the Indian diaspora highlighted his government's work and also took jibes at the Opposition, primarily the Congress.

Talking about making a number of services of various government departments online, Prime Minister said, "Almost 10,000 services of the Central government, state government and local self-government have become available online be it government assistance, scholarship, payments to farmers, everything is transferred directly to the bank account."

"Now no PM will have to say that I send 1 rupee from Delhi, and 15 paise reach (the people)," PM Modi said, in a jibe directed at former Prime Minister Rajiv Gandhi.

"What kind of 'hand' was that, which scrubbed off 85 paise," he added.

The Prime Minister also talked about the success of the Direct Benefit Transfer (DBT) schemes, highlighting the large volumes of money that have been transferred directly to the beneficiaries.

"India has transferred more than 22 lakh crore through DBT in the last 7-8 years, it is more than 300 billion dollars, this amount has reached directly into the accounts of the beneficiaries, with no middleman, no cuts, no cut money," PM Modi said.

The Prime Minister also talked about the "record number of airports being built in the country", large scale work on metro construction, as well as connecting villages with optical fibre network.

"Before 2014, wherever you see, everything would be a work in progress. I am not criticising anyone but if a road was made, then it's dug up for electricity, then for water. To end this, we've made PM Gati Shakti Master Plan to bring all stakeholders to one platform," PM Modi said.

This address to the Indian community was given shortly after the 6th India-Germany Inter-Governmental Consultations which were co-chaired by PM Modi and Chancellor Scholz.

The Prime Minister said the Inter-Governmental Consultations were productive.

Discussions covered key areas of bilateral cooperation under the overall strategic partnership, as well as regional and global developments.

PM Modi is also scheduled to visit Denmark on Tuesday to hold talks with leaders from Nordic countries. He will also make a stopover in Paris on Wednesday and meet the newly re-elected French President Emmanuel Macron. (ANI)