World News | As President of UNSC, India Will Back Initiatives That Bring Peace, Stability in Afghanistan, Says TS Tirumurti

India will always be a supporter of initiatives that can bring peace and stability in Afghanistan, said Ambassador of India to United Nations, TS Tirumurti while laying out the Afghanistan policy perspective that India at the UN will pursue during the Security Council Presidency starting today. 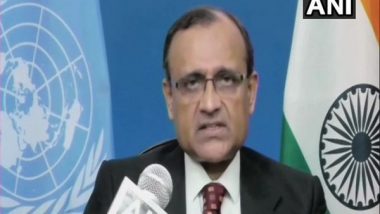 New York [US], August 2 (ANI): India will always be a supporter of initiatives that can bring peace and stability in Afghanistan, said Ambassador of India to United Nations, TS Tirumurti while laying out the Afghanistan policy perspective that India at the UN will pursue during the Security Council Presidency starting today.

"We will not discount the possibility of the Security Council, taking stock of the situation in Afghanistan during this month. And as the President of the Council, we will of course be very supportive of the initiative by member states that can bring these and stability to the country," India's Permanent Representative to UN told ANI in an exclusive interview.

In the backdrop of intensifying conflicts in Afghanistan, Tirumurti's comment comes when asked about how India plans to take the lead highlighting the situation in Afghanistan and will India initiate a discussion on Pakistan for supporting the Taliban.

"India has consistently kept the spotlight on combating terrorism, both inside the discussions in the council and outside as well. They not only strengthened the efforts to combat terrorism, especially for example in financing terrorism. But we also prevented efforts to dilute the focus on terrorism," Tirumurti replied.

The top Indian envoy to the United Nations reiterated that India has always maintained it would like to see an independent, peaceful, democratic stable and prosperous Afghanistan.

"As the External Affairs Minister (EAM) S Jaishankar has underlined, it is important that any government that comes to power in Afghanistan is seen as legitimate in the eyes of the people. I believe these are common concerns of the members of the Security Council as well," Ambassador Tirumurti further added.

TS Tirumurti said that the situation of Afghanistan is of grave concern. The violence has been continuing unabated, and in fact, has increased. The UN has reported that the number of civilian casualties is growing. targeted killings are increasing, women, girls and minorities are being systematically targeted including the recent attack on the United Nations compound that was targeted in Herat.

Tirumurti shared that "The members of the Security Council are naturally deeply concerned at the turn of events."

In the past few weeks, Afghanistan has witnessed a surge in violence as the Taliban have intensified their offensive against civilians and Afghan security forces with the complete pullback of foreign forces just a few weeks away.

Taliban has captured several territories largely in rural provinces as foreign troops pull out. It has been reported that many injured members of the Taliban are being treated in hospitals in Pakistan and Shuras are also running with full legitimacy from the cities of Quetta and Peshawar. (ANI)