Get latest articles and stories on World at LatestLY. Regardless of Chinese President Xi Jinping's staunch support that he once showed for President Vladimir Putin, China is now compelled to review its so-called no limits friendship with Russia. 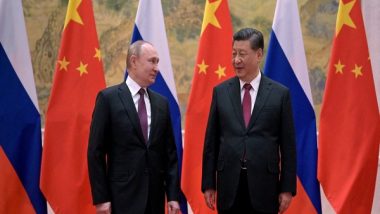 Beijing [China], May 17 (ANI): Regardless of Chinese President Xi Jinping's staunch support that he once showed for President Vladimir Putin, China is now compelled to review its so-called no limits friendship with Russia.

Protecting the country's overseas assets from US-led sanctions, China has chosen to break Russia's trust by cutting its payment services, space ties and suspending scientific cooperation amid the war in Ukraine.

In an emergency meeting with domestic and foreign banks, Chinese regulators mooted how they protect the country's overseas assets from US-led sanctions similar to those imposed on Russia for its invasion of Ukraine, reported The Hong Kong Post.

As per the US sanctions on Russia amid the Ukraine war, Visa and Mastercard said that they would cut their services in Russia. In view of this, Russia's leading banks had begun looking into issuing cards that operate on a Chinese payment system.

In less than two months, Beijing broke the trust and ended UnionPay's cooperation with Russian banks.

China's decision to cooperate with the West at the cost of its relationship with Russia indicatedthat China was losing patience with regard to the ongoing conflict between Russia and Ukraine that is unlikely to end in the near future.

Xi Jinping is hell-bent to avoid the looming economic threat even if that comes at the cost of the Sino-Russia relationship. Realising that the ongoing conflict would badly hit its economic interest due to sanctions, the Xi Jinping administration decided to end UnionPay's cooperation with Russian banks and end space ties with Russia.

China's UnionPay has refused to cooperate with Russia's biggest lender Sberbank and has also suspended talks with other banks due to fears of secondary sanctions. According to available information, "The project [to issue UnionPay cards] is temporarily on hold."

Reports from Moscow stated that In fact, Russian users of UnionPay have also reported difficulties with using the network system to make payments in the US, Israel, Europe, Asia, and the Middle East.

President of the Russian Academy of Sciences Academician Alexander Sergeyev said that Chinese scientific contracts with Russia are frozen, as per the media outlet.

"Our Chinese scientific colleagues have also paused. Over the past month, we have not been able to enter into serious discussions of the situation with them, despite the fact that we really have built excellent cooperation," Sergeyev emphasized. (ANI)