The knives were finally out on Monday between Tesla CEO Elon Musk and Parag Agrawal as the Twitter CEO went into finer details on how the micro-blogging platform is fighting spam and fake accounts, to which Musk has objected and put the $44 billion Twitter takeover deal on hold. 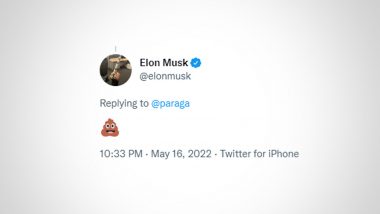 New Delhi, May 16: The knives were finally out on Monday between Tesla CEO Elon Musk and Parag Agrawal as the Twitter CEO went into finer details on how the micro-blogging platform is fighting spam and fake accounts, to which Musk has objected and put the $44 billion Twitter takeover deal on hold.

Musk even showed an emoji depicting a "pile of poo" to Agrawal on his Twitter thread.

"Our actual internal estimates for the last four quarters were all well under 5 per cent -- based on the methodology outlined above. The error margins on our estimates give us confidence in our public statements each quarter," said Agrawal.

He replied to Musk who said he does not believe in Twitter findings which say that false or spam accounts represent fewer than 5 per cent of its monetisable daily active users (229 million).

Musk had said his team was busy finding out the presence of fake/spam accounts with the random sampling process.

Agrawal replied: "Unfortunately, we don't believe that this specific estimation can be performed externally, given the critical need to use both public and private information (which we can't share). Externally, it's not even possible to know which accounts are counted as mDAUs on any given day".

To which, Musk said: "So how do advertisers know what they're getting for their money? This is fundamental to the financial health of Twitter."

"The most advanced spam campaigns use combinations of coordinated humans + automation. They also compromise real accounts, and then use them to advance their campaign. So -- they are sophisticated and hard to catch," he argued.

"The hard challenge is that many accounts which look fake superficially - are actually real people. And some of the spam accounts which are actually the most dangerous - and cause the most harm to our users - can look totally legitimate on the surface," said the Indian-origin CEO.

He admitted that they aren't perfect at catching spam.

"And so this is why, after all the spam removal I talked about above, we know some still slips through. We measure this internally. And every quarter, we have estimated that <5 per cent of reported mDAU for the quarter are spam accounts," he added.

"Our estimate is based on multiple human reviews (in replication) of thousands of accounts, that are sampled at random, consistently over time, from *accounts we count as mDAUs*. We do this every quarter, and we have been doing this for many years," Agrawal noted.

Musk, whoever, was not convinced at Agrawal's arguments.

"There are LOTS of details that are very important underneath this high-level description. We shared an overview of the estimation process with Elon a week ago and look forward to continuing the conversation with him, and all of you," Agrawal further said.

(The above story first appeared on LatestLY on May 16, 2022 11:50 PM IST. For more news and updates on politics, world, sports, entertainment and lifestyle, log on to our website latestly.com).