Get latest articles and stories on World at LatestLY. Los Angeles Mayor Eric Garcetti's nomination by President Joe Biden's administration to be US Ambassador to India is in limbo after a Senate report released this week suggested that Garcetti had ignored a pattern of sexual harassment allegedly carried out by one of his top aides. 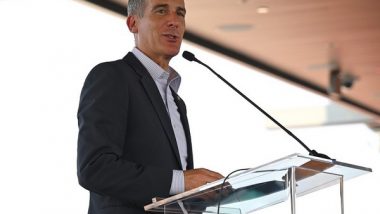 Washington [US], May 14 (ANI): Los Angeles Mayor Eric Garcetti's nomination by President Joe Biden's administration to be US Ambassador to India is in limbo after a Senate report released this week suggested that Garcetti had ignored a pattern of sexual harassment allegedly carried out by one of his top aides.

The 23-page report details the findings of an investigation led by Senator Chuck Grassley, a Republican lawmaker from Iowa, who in March asked to delay Garcetti's confirmation, citing "numerous credible allegations from multiple whistle-blowers" of misconduct by Rick Jacobs, a close adviser to Garcetti and his former deputy chief of staff.

Garcetti's office has repeatedly denied that the mayor saw or heard about sexual harassment, and said that the report contained only "false, repackaged allegations that have been proven false by multiple unbiased investigations and reviews," according to a statement from Dae Levine, a spokeswoman for the mayor.

According to the report, "the scope of this investigation is limited to determining whether Mayor Garcetti was aware that Jacobs sexually harassed or made racist comments towards others."

"To conduct this investigation, we interviewed 15 witnesses, read 26 depositions taken in the course of a civil suit against Jacobs, and reviewed an investigative report and a supplemental report commissioned by the City of Los Angeles," the report added.

As per the report, Rick Jacobs has known Eric Garcetti since approximately 2003-2004. Soon after Garcetti became Mayor of Los Angeles in July 2013, he hired Jacobs as his Deputy Chief of Staff. Jacobs remained at City Hall until February 2017 when he left to join the board of the Mayor's Fund, which is a privately funded initiative to support the Mayor's agenda, stated the report.

Officer Garza eventually left the detail in 2020 and filed a lawsuit against the City of Los Angeles in July of that same year.

In response to the lawsuit, the City of Los Angeles hired Leslie Ellis of Ellis & Makus LLP toconduct an investigation into the claims of misconduct by Jacobs (hereinafter known as theEllis Report).

The investigation conducted by Ellis was focused exclusively on the allegations made by Officer Garza against Jacobs. Ellis interviewed Jacobs and 27 other witnesses and submitted her findings in a confidential report to the City, which cleared Jacobs of any wrongdoing.

By virtue of clearing Jacobs of any wrongdoing, Mayor Garcetti was also cleared of any misconduct since the allegations against him posited that he was aware of Jacobs' harassment.

"Mayor Garcetti, the State Department, and others in the media have pointed to the Ellis Report as evidence that Mayor Garcetti had no knowledge of Jacobs' actions. The State Department has not conducted its own investigation and says that it cannot comment on the veracity, or lack thereof, of the accusation," the statement in the Senate report read.

In January this year, the Senate Foreign Relations Committee confirmed the nomination of the Los Angeles Mayor to be the US Ambassador to India. However, the nomination needed to be confirmed by a majority of the US Senate.

Garcetti was among a series of ambassadors and other foreign affairs nominees approved. Although individual senators raised public objections to some of the nominees, none did to Garcetti's selection.

During his appearance before the committee on December 14, Mayor Garcetti was questioned by lawmakers weighing his nomination to become the U.S. ambassador to India.

Garcetti during his testimony gave a statement followed by questions from lawmakers of the Senate Foreign Relations Committee."Few nations are more vital to the future of American security and prosperity than India," Garcetti told the committee. (ANI)