Get latest articles and stories on World at LatestLY. Expressing anger over inaction by authorities to contain the alarming rise in cholera cases and demanding access to clean water, Pakistanis staged a protest in Dera Bugti district's Pirkoh tehsil of Balochistan province on Saturday. 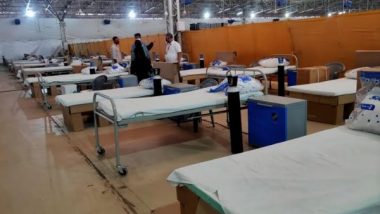 Islamabad [Pakistan], May 15 (ANI): Expressing anger over inaction by authorities to contain the alarming rise in cholera cases and demanding access to clean water, Pakistanis staged a protest in Dera Bugti district's Pirkoh tehsil of Balochistan province on Saturday.

This comes as four people, including a toddler, have died on Friday in a cholera outbreak at Dera Bugti's Pirkoh Tehsil of Balochistan as Pakistan deals with an acute water crisis, including the unavailability of clean drinking water.

According to Azam Bugti, Bugti District Health Officer (DHO), a total of 210 new cholera cases were reported on Saturday along with two more deaths, taking the total death toll so far to six, including two children. As per the DHO, 15 patients were in critical condition, reported Dawn.

The health official stated that since the first case of cholera emerged on April 17 this year, over 1500 people have taken ill due to the disease to date. Further, as many as 123 new cholera cases were reported on Wednesday.

The locals expressed anger over the inaction by the authorities and government officials. They voiced demands that Pirkoh be declared calamity-hit and medicine, food, and clean water be provided.

They also contested the death toll which was quoted by the officials. As per them, a total of 20 people had actually died while over 3,200 were ill due to the infectious disease.

Politics over the deteriorating cholera situation also erupted. Senator Sarfraz Bugti called on authorities to declare an emergency in Pirkoh, take stock of the situation, and lend aid to the afflicted, along with completing water supply schemes, as per the media portal.

In a tweet, Senator questioned the authorities writing, "May I remind you that Balochistan is also a part of Pakistan?" (ANI)