Maydm, founded in 2015, equips women and young girls with the skills so they can win in life. Its CEO, Winnie Karanja, as a woman of color herself, knows the struggle that women have to face when they pursue their careers. Women of color have to work twice as much. 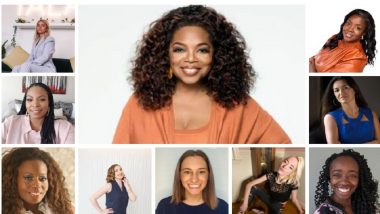 The power play between men and women has been unfair against women, to say the least. Women have to fight and engage in several movements before they’ve had the chance to assume niches in society. Before, men were the only ones who held power or owned businesses, but now, we have women presidents, businesswomen - influential women who have proven that women are as capable as men.  Here are Yahoo Finance’s Top 10 powerful women in 2021:

Oprah Gail Winfrey is a host, TV producer, actress, author, and philanthropist best known for her talk show, The Oprah Winfrey Show, which ran for 25 years. She was dubbed the Queen of All Media and is acknowledged as the richest African American in the 20th Century, with her net worth at $2.5 billion. At one point in 2007, she was ranked the most influential woman in the world. Born and raised in poverty in rural Mississippi, she was later sent to live with her barber father in Tennessee. She landed a radio job in high school and became a co-anchor for local news at 19. Her career went on in a perpetually uphill streak from there.

Founded in 2019, TALA stands at the helm of the fashion industry. In its first year, the company was able to garner over £6.2 million in sales, making it one of the most successful start-up businesses of the year. CEO and founder Grace Beverley leads the company with an excellent work ethic. Both a student of music at the University of Oxford and a CEO of a multimillion euro company, Grace is the best of both worlds.

Her extreme passion for fashion, coupled with her mission to contribute to society, made her a phenomenon in the fashion industry. She’s expanded TALA and has four factories spread across the globe, in China, Morocco, Turkey, and Portugal.

Tephanie Delaney, the Founder and CEO of Wild-Eyed VisionAries Consulting, is a business maven. She serves a community of entrepreneurs, business owners and brands. Tephanie is best known for her capacity to cultivate ideas and her unparalleled vision.

Humble at heart, she’s not one to conceal her shortcomings. Her experience spans over two decades and includes various roles in the real estate industry. She is currently a licensed Realtor in Minnesota and Missouri.

Tephanie is a driving force behind many ventures, one of her recent endeavors was conceptualizing the online marketplace, BlackBuyBlack.com. The site launched on Blackout Tuesday, as a tool to assist in refueling the Black economy. Tephanie drove nearly 100,000 visitors to the website within the first six weeks.

As a Business Development Coach and a servant by nature, her life is fulfilled by empowering others to unlock their greatest potential.

CEO Takisha Clark is the first African-American woman to start a franchise within the Retail Shipping & Mail industry. Her goal is to transform the business to a full-scale corporate company. Takisha is from Compton, CA and from her hometown she has risen to become a successful black woman who has overcome many obstacles in her life.

As a Core energy life and leadership coach, Monica Alexandra Ribero, also known as The freedOM Coach, is transforming overachievers’ lives in a more positive manner using the power of energy. She has been supporting multi-million dollar corporations grow by becoming more conscious in supporting the inside-out growth of their people. Being part of the corporate world herself for over 15 years; the successful Bolivian coach knows how important it is for companies to be innovative and solution-focused.

She shares that, just like individuals and families, organizations have a certain energy frequency, which is the aggregate of all stakeholders' resonating level. This is why it is important for businesses to go beyond the usual ping pong table and unlimited vacation type of benefits, or beyond a positive culture manifesto if companies want to achieve a transformational growth in today’s competitive world. “It is imperative, for small and big corporations, to support their people in becoming more conscious, because the higher their collective vibration, the higher levels of life satisfaction which gives new space to creativity, confidence, fearlessness, passion, high energy engagement, and innovation resulting in a more profitable outlook. It is the new way corporations are finding their edge.” she adds.

Monica believes that by helping companies become aware of their collective vibration, build conscious leaders, and expand their success by elevating their energy; there will be a positive ripple effect in the world where more people are supported in overcoming limitations, becoming who they want to be and ultimately living the life they envision. It is a win-win-win.

As the founder and CEO of Fortlo, Inc and Fortlo Academy, Renea L. Moss has a heart the size of the moon and a mind as sharp as a tack. With a mindset that learning should be fun and reflect everyone, she is changing the face of education through her line of educational products I.C.ME and pedagogy TTTAGS.

Her work in the education field has awarded her CWs’ Super Teacher of the Week, Debate Coach of the Year, Director’s Commendation Award, NSDA National Educator of the Year Top 5 Finalist, and more.

As a liaison with the National Uganda Debate Council, her dedication to equity in education has garnered her committee placements with Yale, the NSDA, and others.

Award-winning, gifted, and natural talent, Renea will be around for a long time to come.

Laura Wright, the go to sales consultant for high 6 and 7 figure women business owners, has mastered the art of sales while closing $43 million-plus. An acclaimed Speaker, Author, Master Sales Coach and Founder of EPIC at Sales, Laura teaches ambitious women how to create compelling offers and hone their sales skills and leverage their businesses beyond 7 figures. She's passionate about empowering women business owners to create more wealth in less time on their terms. Laura currently lives in Baltimore with her husband, Shawn, her son, Dermott, and their big softie of a Bernese Mountain Dog, Oliver.

Founder of Inspiring My Generation Corporation (IMG), a nonprofit dedicated to fighting the disparity in mental health awareness, support, and treatment accessibility. Francesca's mission is to be a voice for those who lost theirs to suicide and to let others struggling know they are not alone. Francesca hosts a weekly Normalize The Conversation IGTV series with advocates and professionals in hopes of ending the stigma.

She also developed an Encouragement Card Program where 150 hand-made cards are sent out to patients in mental hospitals monthly. This year alone, Francesca launched the T3 Mental Health Grant to provide financial assistance to individuals living with mental illness who cannot afford treatment and IMG’s first clothing collection called “therapy for all” where proceeds are donated to the Grant.

Jessa Furches has been on Instagram since 2012. She never gives up on pursuing her dreams of becoming an inspiration through her music and she’s overcome countless battles in life. Jessa fights against Cystic Fibrosis daily, while growing up without a father and recently losing her long career with her twin sister, who is now in prison. She remains resilient despite life knocking her down and being exposed to the negativity through the years. Writing, arranging and recording her own music, she can’t and won’t stop. Her first solo album will be released this June 2021. The best is still yet to come from Jessa Furches.

Maydm, founded in 2015, equips women and young girls with the skills so they can win in life. Its CEO, Winnie Karanja, as a woman of color herself, knows the struggle that women have to face when they pursue their careers. Women of color have to work twice as much. So she founded Maydm so it may become a home for women like her. Winnie hopes that Maydm will become a safe place for many like her and develop their skills so when the right time and company comes, they may get to keep it, excel, and shine above others.