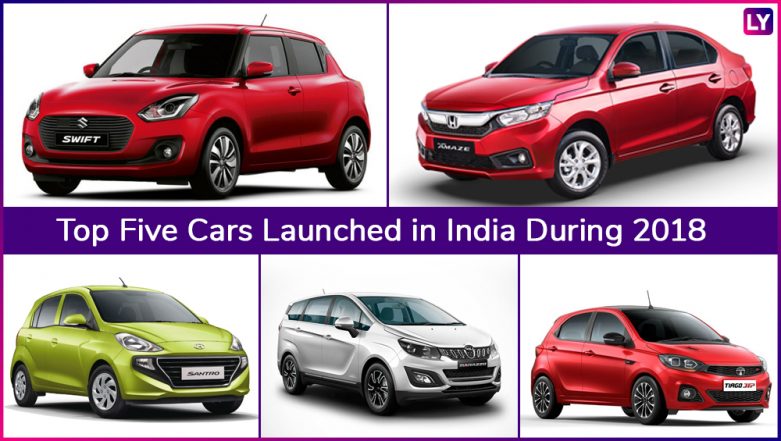 The year 2018 is about to end! And, we have seen many events during the year making it an interesting for the automotive industry. Kick-started with Auto Expo, we saw everything during the year ranging from hatchbacks to premium SUVs. During the year, we witnessed some very important launches throughout the year across all the segments in the domestic market. Though, it is quite difficult to list all of them. We have listed top five cars launched in the Indian market during the year 2018. 2019 Mercedes-Benz V-Class Luxury MPV To Be Launched in India on 24 January, 2019.

Maruti Swift: The new generation Swift hatchback was one of the highly awaited cars from the Indo-Japanese car maker that broke covers at the Auto Expo 2018. The new Swift hatchback is more stylish, feature loaded and safer than the previous model. The car is offered in both petrol and diesel iterations wherein the former gets 1.2-litre K-series unit whereas the latter is a 1.3-litre DDiS version. The petrol mill is capable of making 89bhp whereas the diesel engine makes 74bhp. Transmission duties include 5-speed manual and AMT unit. Indian Car of the Year 2019 Award: Maruti Suzuki Swift Hatchback Wins ICOTY.

Hyundai Santro: Hyundai India reintroduced its most iconic brand – Santro in India during 2018, which was one of the most awaited cars. Based on the new platform, the new Santro gets new features like touchscreen infotainment system with Android Auto, Apple CarPlay, rear AC vents and much more. Under the hood, the new Hyundai Santro comes powered by a 1.1-litre, 4-cylinder engine that is tuned to make 69bhp of max power. The engine is mated to a 5-speed manual and 5-speed AMT unit.

Mahindra Marazzo: Mahindra’s newest MPV – Marazzo is one of the most important launches we witnessed during the yeae 2018. Built on a new frame, the overall design of the Marazzo MPV is inspired from a Shark. Touted as one of the best value for money MPVs, the car is bold, stylish and safety oriented. Recently, the MPV bagged four star safety ratings at Global NCAP crash test. Under the hood, the new Mahindra Marazzo comes powered by a new 1.5-litre, 4-cylinder diesel engine that can produce 121 bhp and 300 Nm of power figures. Transmission duties are carried out by a 6-speed manual gearbox.

Tata Tiago JTP: Tiago JTP, a hot-hatch version of the Tiago, was launched in India earlier this year which is co-developed by Tata Motors and Jayem Automotives. The new Tiago JTP is powered by a 1.2 -litre turbocharged Revotron unit that develops 112 bhp and 150 Nm of peak torque. The main underlines of the new Tiago JTP comes with 15-inch diamond cut alloy wheels, roof spoiler, and wider tyres, bold red accents, ConnectNext infotainment system by Harman and double stitching on the seats.