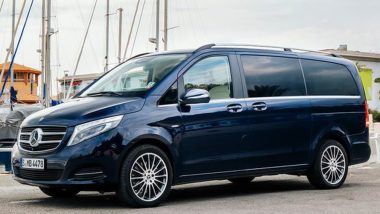 Mercedes-Benz, a leading German luxury car manufacturer will be launching its luxury MPV - V-Class in the Indian market on 24 January, 2019. However, this is not the first time that the German car maker will be introducing the luxury MPV in India. As a reminder, Mercedes-Benz introduced the R-Class MPV in India by the year 2011. However, the MPV was later on discontinued as it failed to make an impact in the market. The premium luxury MPV will be introduced in the domestic market as a CBU unit and it will be targeted at hospitality and service sector. Mercedes-Benz SUVs Worth Rs 3 Crore Gifted to Employees by Surat-Based Businessman.

Moreover, it is reported that the car maker may localise the MPV if the demand from the market increased. The upcoming Mercedes-Benz V-Class is the third generation version that is already on sale in the global market since 2014. Indian Car of the Year 2019 Award: Maruti Suzuki Swift Hatchback Wins ICOTY.

The forthcoming Mercedes-Benz V-Class is essentially a conventional van featuring front doors whereas the rear seats can be accessed via sliding door. The MPV is offered in three different lengths in the global market. The compact and longer version of V-Class measures 4895mm and 5140mm in terms of length. However, extra-long version of V-Class measures 5370mm. It is rumoured that the company might introduce long and extra-long versions of V-Class in India. Also, we will also see Mercedes-Benz's V-Class in 7-seater as well as 8-seater options.

The V-Class MPV comes equipped with swiveling front seats which can be rotated 180 degrees to face rear passengers. The MPV also gets ambient lighting and company's Audio 20 infotainment system with navigation. In terms of safety, the MPV is equipped with attention assist, crosswind assist, tyre pressure monitoring system and headlight assist and much more.

Under the bonnet, the new upcoming Mercedes-Benz V-Class MPV will be powered by a 2.0-litre BS-6 diesel unit, which is also seen on the new C-Class that is already on sale in India. The unit is capable of churning out 194PS and 400Nm of power figures. Transmission duties will be carried out by 9-speed AT unit.

(The above story first appeared on LatestLY on Dec 22, 2018 02:38 PM IST. For more news and updates on politics, world, sports, entertainment and lifestyle, log on to our website latestly.com).