Every year, Forbes India comes out with a list of influencers or celebs who have achieved heights in their respective fields. Now, the annual list of 2021 comprising many well-known faces has hit the internet. Actresses Keerthy Suresh, Tripti Dimri and YouTuber Ashish Chanchlani feature on the coveted list. Check it out. 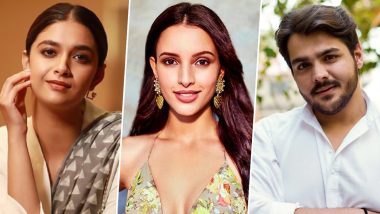 Every year, Forbes India comes out with a list of influencers or celebs who have achieved heights in their respective fields. Now, the annual list of 2021 comprising many well-known faces is out. South actress Keerthy Suresh and Netflix's Bulbbul actress Tripti Dimri, are the two woman who has made it to the coveted list from the entertainment section. Youtuber Ashish Chanchlani also gets a spot. The list mentions their names and lauds them for their contribution as an entertainer under the age of 30. This is indeed huge and we are happy for them. Bulbbul: All You Need to Know About Tripti Dimri, the Lead Star in Anushka Sharma's Netflix Film.

For the one's who aren't aware, Keerthy happens to be a popular face from the South industry and also has won National Award (Best Actress) for playing the role of Savitri in Telugu film Mahanati (2018). As soon as she got to know about the news, she took to Twitter and wrote, "Honored to be one among the different walks of fame in the #ForbesIndia30U30. Thank you so much." Sasta Biig Bosss 'Funny' Memes and Jokes Take over Twitter After Ashish Chanchlani's Supposedly Hilarious Bigg Boss 14 Spin-off Goes Viral While We Fail to To Understand WHY!

Honored to be one among the different walks of fame in the #ForbesIndia30U30. Thank you so much @forbes_india. Humbled 🙏🏻😊 https://t.co/1XIbARcDEX

Talking about Tripti Dimri, she impressed one and all with her stellar act in Netflix's Bulbbul and since then has been in a lot of demand. However, that was not the first time she faced the camera as she had made her Bollywood debut in 2017 with Poster Boys and later was seen in Laila Majnu.

Finally coming to the smart YouTuber, Ashish Chanchlani, he was been doing wonders with this content and so surely deserves a place in Forbes 30 Under 20 list. He recently also became the second most subscribed YouTuber in India. Congratulations to the trio. Stay tuned!

(The above story first appeared on LatestLY on Feb 03, 2021 10:18 PM IST. For more news and updates on politics, world, sports, entertainment and lifestyle, log on to our website latestly.com).