Bulbbul: All You Need to Know About Tripti Dimri, the Lead Star in Anushka Sharma's Netflix Film

The Laila Majnu pair reunite in Netflix's Bulbbul. With Twitterati going all crazy over Trpti Dimri's amazing performance in the latest OTT film, we look at the actress' past work and other achievements. 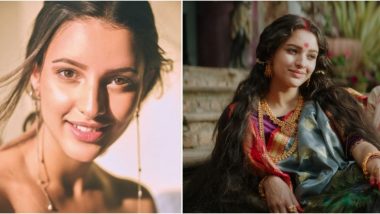 If you happen to head over to Twitter or any other social media platform today, you'll realise that Anushka Sharma's latest production, Bulbbul is the talk of the town. The movie has received rave reviews from critics as well as audiences and one name that has been receiving an equal amount of praises has been it's lead actress Tripti Dimri. Not only does Dimri look gorgeous as the 'zamindarni' in the film but she has even put up a stellar performance. For many, Tripti has come across as a revelation in this film and are wondering where she was all this time. Bulbbul Movie Review: Tripti Dimri’s Strong Performance and Its Visual Flair Make Anushka Sharma's Spooky But Lethargic Offering Worth A Watch.

For the uninitiated, Tripti was the female lead in Sajid Ali's Laila Majnu. The film won a lot of critical appreciation and surely we knew both Tripti and Avinash Tiwary were destined for big things. The Laila Majnu pair reunite in Netflix's Bulbbul. With Twitterati going all crazy over Trpti Dimri's amazing performance in the latest OTT film, we look at the actress' past work and other achievements.

Tripti Dimri hails from Uttarakhand and began her career in showbiz with modelling. Before turning an actress, she appeared in several commercials. The 24-year-old actress debuted in Bollywood with Poster Boys in 2017. She later bagged Sajid Ali's Laila Majnu, written by Imtiaz Ali. Netflix's Bulbbul is her third film.

Tripti Is an Avid Traveler:

There's a lot one person's Instagram can say about them and for actress Tripti Dimri, it sure is that she loves travelling. The actress' profile boasts of some amazing pictures from her adventurous trips. From snow-clad mountains to camping in the woods, Tripti has done it all and we bet she'll inspire you to pack our bags hop onto some exciting destination now.

Because Green makes me Happy 💚

Tripti Once Played the 'Santoor Mom':

We mentioned earlier that Tripti has appeared in commercials before. The actress also appeared in the popular soap brand, Santoor's commercial which are known for celebrating young moms. Dimri looked super pretty in this one.

Laila Majnu and now Bulbbul co-stars, Tripti Dimri and Avinash Tiwary surely seem to have a brilliant rapport. The duo have appeared on each other's Instagram accounts and have some uber cute snaps together. The duo are always singing praises for each other in interviews too. Bulbbul Actress Tripti Dimri Talks About Reuniting With Laila Majnu Co-star Avinash Tiwary: 'It Was Comforting To Have Him Around'.

@avinashtiwary15 tujhe Kya lagta hai....ye hum kar rahe Hain 😂😂 (only you can understand this one) 🙈

If you haven't watched Bulbbul yet, the film starring Tripti along with Parambrata Chatterjee, Paoli Dam and Rahul Bose in lead roles, revolves around a bit of old fables and witchcraft from West Bengal. The film is now streaming on Netflix.

(The above story first appeared on LatestLY on Jun 24, 2020 08:30 PM IST. For more news and updates on politics, world, sports, entertainment and lifestyle, log on to our website latestly.com).