Ariana Grande recently got married in a secret way to Dalton Gomez. And so here's looking at other stars who also went the hush-hush way for their big day. Read on. 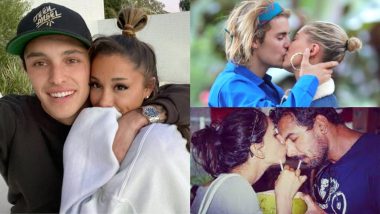 We love it when celebrities spill some gossip about their private affair or marriage. However, not all celebs are fond of making everything official. A recent example of this can be singer Ariana Grande's secret wedding with real estate broker Dalton Gomez. Her marriage news took the internet by storm as who knew that this is gonna happen this soon. But well, Ariana is not the only one who did this, as there are numerous examples of Bollywood as well as Hollywood pairs who secretly got hitched. Let's check it out. Mother’s Day 2021: Anushka Sharma, Nataša Stanković, Gigi Hadid – New Mommies Who Will Celebrate the Special Day for the First Time!

These are two who've made us write this piece and so why not start with them. FYI, the lovebirds got married in a secret ceremony this weekend at her home in Montecito with 20 people in attendance.

This Bollywood couple was able to keep their shaadi hidden from the limelight. However, the world came to know about their togetherness when their New Year's post on social media mentioned ‘John and Priya Abraham’.

After dating for almost three months, Justin and Hailey decided to get married. But before their public wedding, the duo had already gotten hitched in a courtroom. Aww!!! Ariana Grande Gets Secretly Married To Dalton Gomez; Here're Five Pictures Of The Couple That Spell Pure Love.

Sophie and Joe chose quite a unique locale for their secret marriage. As the two surprised their fans when the internet was filled with pictures from their wedding day from Vegas.

Bollywood diva Preity married Gene in the US on February 29, 2016. Well, it was technically not the couple who broke the news of their wedding, but Sussanne Khan's post let the cat out of the bag.

Urmila Matondkar and Mohsin Akhtar Mir also went the secretive way and got married in a private ceremony in 2016. It was celebrity designer Manish Malhotra who was the only guest at this shaadi.

These are few popular celebrities who managed to stay away from the paparazzi and got married in a secret way. Well, all we feel is not every celebrity wants to go the larger-than-life way, as there are few who like it private when it's all about the BIG day. Stay tuned!

(The above story first appeared on LatestLY on May 19, 2021 12:33 PM IST. For more news and updates on politics, world, sports, entertainment and lifestyle, log on to our website latestly.com).