On the occasion of mother's day 2021, here we bring to you 5 mommies from the showbiz, who will be celebrating the special day with their kids for the first time. Check it out. 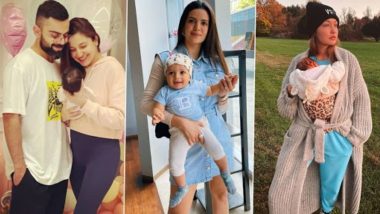 The second wave of coronavirus is sparing none. While we thought that we defeated the deadly bug last year... but it mutated and here it is once again creating mayhem in India. The virus entered the world at the start of 2020 and ruined many families. However, amid the chaos, we also saw some good news' wherein many fams were blessed with babies, which added joy in the testing times. We even saw many celebs getting preggers and giving birth to tiny tots. And as May 9 is celebrated as Mother's day around the globe, let's take a look at the new mommies from showbiz. Mother's Day Special: 11 On-Screen Mothers Of Bollywood That Define Maa In Cinema.

It was on January 11, 2021, when Anushka Sharma and Virat Kohli were blessed with a baby girl whom they named Vamika.

Hollywood sensations, Gigi Hadid and Zayn Malik have kept their daughter Khai away from the public eye. The two was blessed with an angel in September 2020.

Amrita Rao and her husband RJ Anmol often share glimpses of their boy on social media. The two have named their son Veer. Check out their baby announcement post below. Mothers Day Special: From Sonam Kapoor’s Neerja to Varun Dhawan’s October, Five Bollywood Films in Recent Years That Embraced the Beauty of Motherhood.

Wife of Hardik Pandya and mother of cutie pie, Agastya, Natasa will be celebrating her first mother's day today. The cricketer and actress were blessed with a boy in July 2020.

These are some of the names which come to our mind first when we think of new mommies from the tinsel town. From Anushka to Katy, these stars will be for the first time celebrating the special day with their kids. Happy mother's day to all the beautiful souls out there. Stay tuned!

(The above story first appeared on LatestLY on May 09, 2021 04:02 PM IST. For more news and updates on politics, world, sports, entertainment and lifestyle, log on to our website latestly.com).