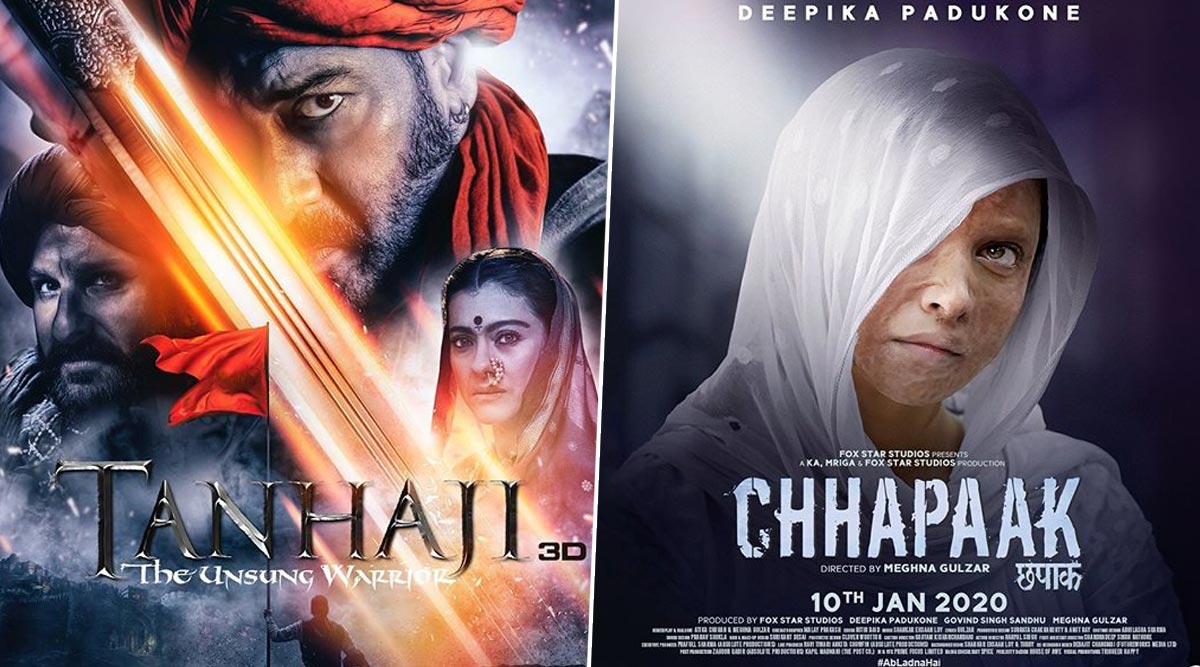 UP govt has made Tanha ji movie tax free. Actor Ajay Devgan has thanked Yogi ji for this. #ThankYouYOGIji," declared Department of Silk and Textile, Uttar Pradesh, on its official twitter handle. The announcement comes after the Deepika Padukone-starrer Chhapak was made tax free in Madhya Pradesh and Rajasthan a couple of days ago. There is a pattern here. Ajay Devgan's Tanhaji is being tax-exempted where there is a BJP government while Chhapak has been made tax free in the Congress states. Chhapaak and Tanhaji: The Unsung Warrior Box Office Report Day 4: Deepika Padukone’s Film Earns Rs 21.37 Crore, Ajay Devgn’s Rs 75.68 Crore.

If one observes pattern closely, one will find that these movies have been declared tax free not because of the subject or merit but what political stand the actors or filmmakers may have taken on issues like Citizenship Amendment Act (CAA) and the JNU violence. Ajay, who essays the title role in "Tanhaji: The Unsung Warrior", had tweeted on January 10: "I have always maintained that we should wait for proper facts to emerge.I appeal to everyone -- let us further the spirit of peace and brotherhood, not derail it either consciously or carelessly. #JNUViolence". ‘Tanhaji: The Unsung Warrior’ Gets Tax Exemption in Uttar Pradesh.

According to reports, Ajay's tweet was seen as his stand on Deepika's JNU visit, which many felt was planned in haste. During her visit, the "Chhapaak" leading lady stood silently in solidarity of JNU students, causing a political storm over the film. Thus both actors made their stand clear on the CAA as well as the JNU violence. Speaking to IANS, Janata Dal United general Secretary and Rajya Sabha MP KC Tyagi said, "We are living in a time which is so unfortunate that real heroes like Tanhaji are divided into Hindu-Muslim and subjects like acid attack become the whipping goats of politics."

Tyagi added: "Both films deal with great subjects and should be watched by the entire country and not just a few states. State governments should make films tax free not as per their political convenience but the subject they deal with." He also said that "Chhapak shows how women have been subjected to violence through acid attacks. It should be declared tax free everywhere because it makes people aware of subjects like acid attack and protects womanhood.

Tanhaji is a Maratha hero but he is unsung and unknown. It is unfortunate that this film is made tax free only by BJP-led state governments and not in Congress-ruled states. This film should also be watched by everyone so that this unsung hero is celebrated". Tanhaji has grossed Rs 75.68 crore at the domestic box-office so far, according to the Bollywood trade website koimoi.com, while the figures for "Chhapaak" stand at Rs 21.37 crore. It will be interesting to which state gives both the films a tax-free status.