Vin Diesel and John Cena starrer F9 will now release on June 25. That means Akshay Kumar's Bell Bottom doesn't need to get bothered with a big box office clash. Both the films were earlier supposed to release on May 28 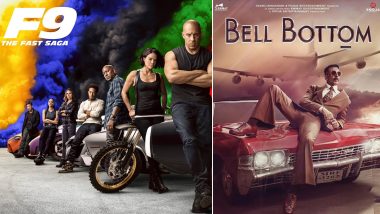 Vin Diesel starrer F9 has been postponed for the third time. It was supposed to hit the theatres last year but COVID-19 played spoilsport. May 28 was its next target but now it has been delayed further. The film will now hit the theatres on June 25. Last month, an explosive trailer of F9 released and we could see a strong box office contest between Bell Bottom and the ninth film in the Fast And The Furious franchise. Akshay Kumar was up against not just Diesel but John Cena as well.  F9: The Fast Saga Teaser – Vin Diesel and the ‘Fast Family’ Is Back for Some Epic Action (Watch Video)

Universal Pictures, the studio that bankrolls the Fast and Furious franchise, also announced that Minions: The Rise of Gru has been pushed to July next year. As per a report in Variety, the announcement to defer the release of F9 is a surprise since the theatres in New York City have been allowed to reopen with limited occupancy. The report suggests that the decision to push the release could stem from the fact that F9 is a $200 mn film and thus, requires massive ticket sales. Rationed occupancy can make it financially non-viable.

(The above story first appeared on LatestLY on Mar 05, 2021 11:43 AM IST. For more news and updates on politics, world, sports, entertainment and lifestyle, log on to our website latestly.com).