Amitabh Bachchan Shares an Emotional Post as He Receives a Grand Welcome on His Touchdown! (View Pics)

On the work front, he will be soon seen in three major Bollywood films. He is working in Brahmastra, also starring Alia Bhatt-Ranbir Kapoor. 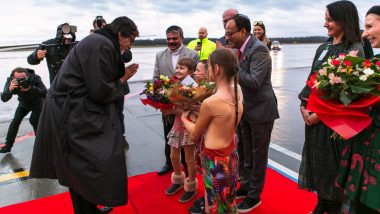 Amitabh Bachchan is known for his energetic personality and humility, across the globe. The Bollywood megastar is right now working round the clock despite his fluctuating health. Not just films, but he also has a plethora of endorsements on his name. However, amid this busy schedule, Big B knows how to keep up with his responsibilities outside work. The actor recently shared few images where he was felicitated and received a grand welcome on his touchdown in a foreign country. Most Tweeted Handles in Entertainment 2019 Male: Amitabh Bachchan, Akshay Kumar, Salman Khan & Other Top Male Twitter Profiles in India.

The veteran actor also shared in the tweet that he felt he did not deserve so much of warmth and love. He further added that he was invited here for the felicitation programme of his father and legendary poet, Harishvansh Rai Bachchan. The megastar termed it an honour for him as a son. The fans were awestruck by this humble tweet by him and assured him that he deserved all the warmth that he is receiving!

Sr Bachchan looked dashing as ever in all-black attire. He was received by a set of women and kids who were decked up in traditional dresses. The children also performed for him here after he came out of his plane, walking on the red carpet laid for him. Check out the pics below.

On the work front, he will be soon seen in three major Bollywood films. He is working in Brahmastra, also starring Alia Bhatt-Ranbir Kapoor. He'll be seen in Emraan Hashmi starrer Chehre and also Ayushmann Khurrana starrer Gulabo Sitabo.

(The above story first appeared on LatestLY on Dec 15, 2019 12:17 PM IST. For more news and updates on politics, world, sports, entertainment and lifestyle, log on to our website latestly.com).