Anek is a socio political, action thriller set against the geopolitical backdrop of Northeast India. Written and directed by Anubhav Sinha, the film features Ayushmann Khurrana in the lead role. 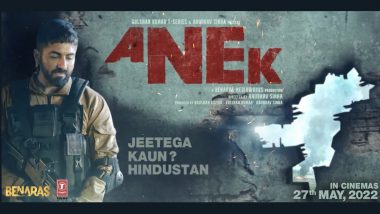 Ayushmann Khurrana-starrer Anek released in theatres today (May 27). The movie which is helmed by filmmaker Anubhav Sinha had high expectations attached to it and has received mixed response. As critics who have watched the press show or fdfs of the political thriller have given an okay-ish review to the flick. For the unaware, the story of Anek revolves around an undercover cop set against the geopolitical backdrop of Northeast India. Just in case, you want to know, what's the review of Anek, here's a roundup of the same. Read on. Anek Movie Review: Ayushmann Khurrana-Anubhav Sinha’s Brave Film Struggles To Work Its Politics Through an Uneven Screenplay (LatestLY Exclusive).

TOI: "The film is engaging, but it could have done with a tighter screen time. It’s a tad slow pre-interval and comparatively fast-paced post that, and unpacks a lot in that timespan."

Hindustan Times: "To sum up, Anek has its heart at the right place and is made with all the right intensions, it's the execution that's a bit disappointing and it's not a story that everyone would understand with equal amount of empathy and interest." Anek Trailer: Ayushmann Khurrana’s Thriller From Anubhav Sinha Explores North-East Conflict and Unfolds Story of an Indian Fighting for Nation’s Peace (Watch Video).

News18: "What holds the film back is its screenplay which fails to generate interest one hour into the film. For a film set in the hotbed of insurgency, it was important to keep the audience engaged throughout. If it wasn’t for its cast, Anek would’ve been a test of your patience. Thankfully, it isn’t."

Scroll: "Anek’s provocative polemics are always stronger on the side that Sinha understands better: his own. If Sinha’s Mulk exposed Islamophobia and Article 15 was aimed at conscientising upper-caste viewers, Anek works best when examining the security establishment in Delhi that rules from on high and causes havoc on the ground."

So, are you going to watch Anek at the cinema halls near you? Tell us in the comment section below.

(The above story first appeared on LatestLY on May 27, 2022 11:34 AM IST. For more news and updates on politics, world, sports, entertainment and lifestyle, log on to our website latestly.com).