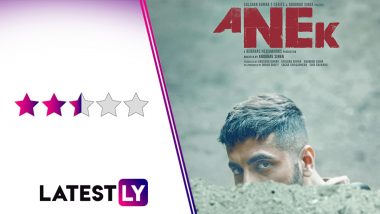 Anek Movie Review: I think Anubhav Sinha should be complimented first for Anek for bringing the conflict of North East region of India to Bollywood. Very rarely does mainstream cinema here even try to address the conflict of one of the most volatile regions of the county. Anek begins with a racist attack on one of the leads, Aido (Andrea Kevichüsa) by the police, before it moves onto a scathing interview of a fictional rebel leader Tiger Sanga that exposes the supposed Indianness of this region. The geopolitical nature of the premise is set right in these two scenes. Anek Movie: Review, Cast, Plot, Trailer, Release Date – All You Need To Know About Ayushmann Khurrana’s Film.

Aido trains to be a boxer and she dreams to represent the country. But unlike the sentiment usually represented in the films where wearing the tricolour is seen as a matter of pride, for Aido it is to make a statement about her identity and her struggles. Back at her home state, she is unaware that her father Wangnao (Mipham Otsal) is the secret leader of an outfit called Johnson that is fighting for the freedom of the region and against the peace 'talks' between Government of India and Tiger Sanga.

She is also oblivious that her boyfriend Joshua is an Indian undercover agent Aman (Ayushmann Khurrana) who is sent to infiltrate the workings of Johnson and such other rebel outfits.

Now I know I made the above premise sound like we are seeing the film's events through Aido's eyes, and I really wish that was the case. Sadly, it ain't. While Aido could have served as a far more compelling lead, while she does turn narrator occasionally and even is present in the film's better moments, Ayushmann's Aman ends up with more footage.

Now in any other movie, that's nothing to complain about. Ayushmann is a very capable performer, who can easily own a frame with his mere presence (so why the need to add distracting sniffs to his body language is something I can't fathom). As someone who adds an outsider's view to the less explored ground politics of the NE, his character isn't unwanted, but feels so when he over-dominates the proceedings vocally presenting his views. Ayushmann Khurrana: We Should Celebrate Uniqueness of India's Diversity.

Anubhav Sinha had done something similar with Ayushmann in the structurally and impactfully far better Article 15 that dealt with caste politics, despite the film's inhered Brahmin saviour complex. However, the lead's inclusion in that movie's events made him a reactionary, who in his way brings attention to the troubling stature of how lower castes are being dealt with in the interiors of the country.

In Anek, however, Aman (such a hard-nosed nomenclature) stands out like a sore thumb, where the better scenes of the movie doesn't even involve him. He is there to express perhaps the director's libertarian views, which I had welcomed in Mulk, Thappad and Article 15 but feels awkward here. Like for example, the sequence between Aman and JD Chakravarthy's character in the car - that's shown in the trailer as well - where they debate about what it is to be an Indian. The scene feels so out of place and clumsily written, especially when the local characters are shown not even wanting to identify themselves as Indians. At one point, Ayushmann even breaks the fourth wall and looks at the camera to emphasise his point on the current political situation (there are also potshots at media pandering and 'vikas' talks). It felt weird rather than effective. Thappad Movie Review: Anubhav Sinha’s Social Drama Is a Stinging Slap on Male Privilege With Taapsee Pannu in Stellar Form.

More than the whole sermonising part, even the character of Aman feels sketchily written. I couldn't figure out his real endgame, and why the intelligence department keep indulging him and his rebellious tactics. His relationship with Aido is weak, we hardly feel for this supposed 'love story', even if Aman doesn't confess he feels anything for her, and that is supposed to matter for the main story. I also never got when Aman had gotten a change of heart. When your protagonist leaves you confused, that doesn't really fare well for the movie.

Anek, however, could have been a far better movie, a powerful piece of cinema if it hadn't tried to sermonise itself way much or baulked at taking a true stand while heading towards a Call of Duty-feel-like climax. Or even play down the Body of Lies-inspired track of Aman and his boss Abrar (Manoj Pahwa), a Ajit Doval-standin, whose Kashmiri identity is used to draw parallels with J&K and the NE conflict. Does that identity matter in the movie? Not much.

For one, the movie should have been completely through Aido's point of view, and there should have been more scenes exploring her and father's clashing views on their fights. Andrea Kevichüsa is fantastic in her debut lead act, and Mipham Otsal gives a good account of himself in every scene he is in. Anek would have been more effective if the focus was more on them, and Aman taking on a more supporting role.

There are also some sequences that do make a strong statement. Like when Aman goes to a detainment camp to see hundreds of tortured prisoners rendered faceless by their bamboo prisons. Or the scene involving the tracking shot of a young boy walking through his village that is being attacked (cinematography by Ewan Mulligan). The most harrowing is the scene where a rebel outfit is violently ambushed by an unseen unit, and the prayer scene afterwards. A murdered child's mother's laments stay with you long enough, echoing the tragic situation of many such inhabitants of her state sandwiched in the politics, a situation that deserve more exposure in mainstream cinema. Anek deserves praise for that, but as a movie, it couldn't escape its own muddled treatment.

- When The Focus is on the Local Characters, Especially Aido, Nico and Wangnao

- A Few Impactful Scenes Revolving Around the Conflict

There is no doubt that Anubhav Sinha took a braver and more ambitious veer with Anek's exploration of the fractured politics of North-East India. However, an uneven screenplay and the constant need to make a statement rob Anek of the same impactful storytelling seen in Sinha's earlier social themed efforts like Mulk, Article 15 and Thappad.

(The above story first appeared on LatestLY on May 27, 2022 10:46 AM IST. For more news and updates on politics, world, sports, entertainment and lifestyle, log on to our website latestly.com).