Helmed by Mahesh Manjrekar, the film also stars Nikitin Dheer in a crucial role. It is being reported that the film went on floors on November 16 in Pune. After shooting for some pivotal sequences with Aayush and supporting cast, the team moved to Karjat and Versova. 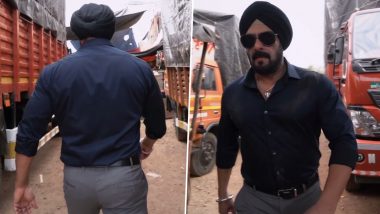 Salman Khan has a lot going on for him right now. From shooting for Bigg Boss 14's Weekend Ka Vaar to finishing off the shoot for Radhe: Your Most Wanted Bhai, Salman has had quite a busy schedule lately. But it looks like there is no stopping for the actor. He finally reached the sets of Aayush Sharma starrer Antim last week and has already shot for his scenes as well. Aayush welcomed the actor on the film's set and gave his fans a sneak-peek of his character as well. Salman Khan’s Guns of North Is Now Titled Antim, Actor to Start Shooting From November.

Aayush posted a video of Salman walking into what looks like a vegetable market in full swag. While we only see Salman's legs at the beginning of the video, we later get to see Salman's face. He is seen wearing a navy blue shirt teamed with grey pants and black shoes. Salman is also wearing a black Sikh turban and a Khalsa locket, which gives us a hint as to what his character will be all about. Salman has been very hush about the shoot of Antim but seeing this video has surely rejoiced his fans.

Take A Look At The Video Here:

The video went viral in no time and garnered 20,466 views in just an hour of its upload. Fans dropped heart and fire emojis where one user went on to say, "Salman Bhai always dashing." This video sure made the wait for Antim even more difficult for Salman's fans. Salman is said to essay the role of a cop on a mission while Aayush will be seen as a dreaded gangster. Guns of North: Mahesh Manjrekar to Direct Aayush Sharma’s Mulshi Pattern Remake!

Helmed by Mahesh Manjrekar, the film also stars Nikitin Dheer in a crucial role. It is being reported that the film went on floors on November 16 in Pune. After shooting for some pivotal sequences with Aayush and supporting cast, the team moved to Karjat and Versova. Salman commenced the shoot for his scenes on December 6 at Mumbai's Filmcity. Antim is the official remake of Marathi film Mulshi Pattern.

(The above story first appeared on LatestLY on Dec 09, 2020 09:50 PM IST. For more news and updates on politics, world, sports, entertainment and lifestyle, log on to our website latestly.com).