Salman Khan is back to the work and how. As after Radhe: Your Most Wanted Bhai, the superstar will soon kickstart the shooting for his next Antim. This one is helmed by Mahesh Manjrekar. Read on. 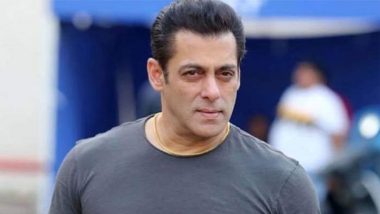 After spending the entire lockdown period at his Panvel farmhouse, Bollywood's Bhaijaan Salman Khan is back to work. Earlier this month, the superstar resumed shooting for Radhe: Your Most Wanted Bhai and also wrapped the same. After this, fans thought that his next target would be the Tiger franchise, however, that's not the case. As Salman is all set to kickstart filmmaker Mahesh Manjrekar's Antim from November 15, reports Mumbai Mirror. The shooting of this gangster dramas will go on floors in Mumbai. FYI, Antim is a Hindi remake to Marathi film Mulshi Pattern. Guns of North: Mahesh Manjrekar to Direct Aayush Sharma’s Mulshi Pattern Remake!

Reportedly, while Salman will essay the role of a cop, Aayush Sharma, on the other hand, will play a dark character. “After a six month break which he spent on the farm, Salman is raring to get back on the sets and do what he does best," tells a source to the portal. Mahesh is currently working towards amplifying the fight between good and bad,” a source told the portal.

"However, over the last few weeks, after several script meetings at his Panvel farmhouse during which various adaptations were considered, the team has locked a version which can justify Salman’s presence and he’s back in the picture. Now, his character is very important to the narrative. It will present him in a new avatar, more real, intense and raw, along with his usual herogiri," added the souce. Radhe: Salman Khan, Disha Patani, Randeep Hooda And Jackie Shroff Resume Shooting (Watch BTS Video).

"A major chunk of the film is set in a village which will be recreated at a studio. Some of the action scenes featuring Salman will be shot at a city studio. He will be shooting till January 2021,” concludes the source.  The report also mentions that earlier, the movie's name was Guns of North, however, now it is Antim that denotes 'the end.' Stay tuned!

(The above story first appeared on LatestLY on Oct 29, 2020 10:48 AM IST. For more news and updates on politics, world, sports, entertainment and lifestyle, log on to our website latestly.com).