Abhinav Kashyap's accusation against Salman Khan and his family gets legal. Arbaaz Khan confirms that they are opting for legal action 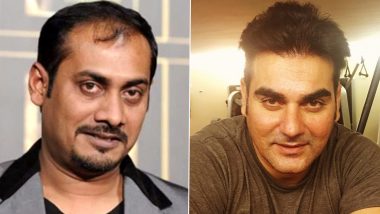 Abhinav Kashyap's Facebook post following the suicide of Sushant Singh Rajput, made a lot of commotion. In it, he blamed Salman Khan and his family of sabotaging his career and also bullying him. Now this isn't a new issue as the director had earlier made similar accusations too. Guess that's why Arbaaz Khan sounded little stumped when he spoke to Hindustan Times about it. He confirmed that they are taking legal action against him but also seems quite puzzled as to why is the director talking about it all of a sudden. Dabangg Director Abhinav Kashyap Accuses Salman Khan and Family For Sabotaging His Career, Says Won't Cow Down Anymore (View Posts).

Speaking to the daily, Arbaaz said, "In fact, we have already taken legal action even before this post; it was after his earlier post. We have had no communication with Abhinav since we started working on Dabangg 2. We parted ways professionally. Don’t know where all this coming from. We are taking legal action.” Anurag Kashyap Reveals The Reason Why He is Staying Out of Abhinav Kashyap-Salman Khan Dabangg Controversy (Read Tweet).

Kashyap had alleged that when he tried to file an FIR with proofs, the Police refused to do so. He had also added, "The reason I moved out of making Dabangg 2 ten years ago is because Arbaaz, in collusion with Sohail Khan and family, was trying to take control of my career by bullying me. Arbaaz sabotaged my second project with Shree Ashtavinayak Films that I was signed up with by personally calling their head Mr. Raj Mehta and threatening him with dire consequences if they made a film with me...”

Kashyap had also spoken about how his family was threatened.

(The above story first appeared on LatestLY on Jun 17, 2020 02:34 PM IST. For more news and updates on politics, world, sports, entertainment and lifestyle, log on to our website latestly.com).