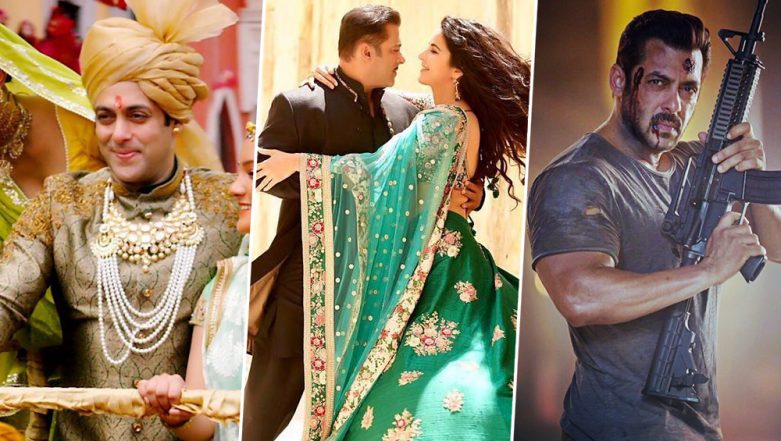 Salman Khan has had six consecutive Eid releases so far and interestingly most of them ended up raking in big money at the Indian box office. This list includes Khan's latest release Bharat which arrived in theatres yesterday, June 5. Co-starring Katrina Kaif and Sunil Grover in the lead, the period drama hit the screens amidst much fanfare and positive buzz. Since the festive occasion of Eid has always been lucky for Bhai, it was expected that his new outing would get cash registers ringing at the ticket windows. But apart from that, Bharat has also broken quite a few records already. Bharat: 5 Best Scenes in Salman Khan and Katrina Kaif’s Film That Strike the Right Chord With the Viewers (SPOILER ALERT)

Despite clashing with India's first 2019 World Cup match, Salman starrer not only took a humungous opening on Wednesday but it also became the actor's biggest opener to date. Bharat, directed by Ali Abbas Zafar, has also turned out to be the highest opener of 2019 and third highest opener of all time when it comes to Hindi films. Now that's super impressive, right? While we are sure that Khan's Eid release will continue to draw the audience big time in the coming days, for now, let's check out the top 5 openers of Salman Khan's career.

Before Bharat, Salman had found his biggest opener in Sooraj Barjatya's 2015 film Prem Ratan Dhan Payo. The family drama brought Khan and Sonam together on the big screen after Saawariya and their jodi did impress everyone. PRDP earned Rs 40.35 crore on its opening day.

Salman's third biggest opener is Sultan which again was helmed by Ali Abbas Zafar. In this sports drama, the Being Human superstar shared screen space with Anushka Sharma for the very first time and the duo nailed their respective roles to perfection. The film collected Rs 36.54 crore on day 1.

The Bharat trio - Salman, Katrina, and Ali - first came together for Tiger Zinda Hai which released in December 2017. The action movie produced by Aditya Chopra set the box office on fire as it raked in Rs 34.10 crore on its first day. Currently, Tiger Zinda Hai is Salman's highest grossing film ever with a lifetime collection of Rs 339.16 crore.

Ek Tha Tiger, a prequel of Tiger Zinda Hai, is fifth on this list. Directed by Kabir Khan, the spy thriller reunited Salman and Kat on the big screen after four long years. No wonder, fans went crazy seeing their sizzling chemistry and the movie collected Rs 32.92 crore on the day of its release.