Bhonsle Trailer: Another Impressive Manoj Bajpayee Performance in A Hard-Hitting Film on the Way!

The official trailer of Bhonsle starring Manoj Bajpayee and Abhishek Banerjee has just dropped and we are intrigued by its raw and rustic setting with the film's controversial hot topic of the North Indian opposed in Maharashtra. The film has already impressed everyone in 20th MAMI Mumbai Film Festival. 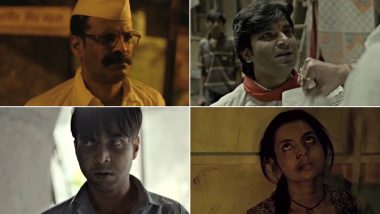 The official trailer of Bhonsle starring Manoj Bajpayee and Abhishek Banerjee has just dropped. The film has already impressed everyone in 20th MAMI Mumbai Film Festival. We get to see Manoj Bajpayee in the titular role of Bhonsle, a Marathi constable standing up against the communal hatred. The best part of the trailer is that we get to see a glimpse of promising performances right from the antagonist Vilas played by Santosh Juvekar, Abhishek Banerjee as a North Indian commoner and Ipshita Chakraborty Singh. Home Stories Trailer: The Netflix Original Film That Won’t Release On Netflix (Watch Video)

Check Out Bhonsle Trailer Below

(The above story first appeared on LatestLY on Jun 19, 2020 02:36 PM IST. For more news and updates on politics, world, sports, entertainment and lifestyle, log on to our website latestly.com).