Coolie No.1 makers have announced that the trailer of the movie will be releasing on November 28 at 12 PM. The movie was all set to release in May 2020 in theatres, but was pushed back due to the pandemic. It has now gone the OTT way and will release on December 25, 2020 on Amazon Prime Video. 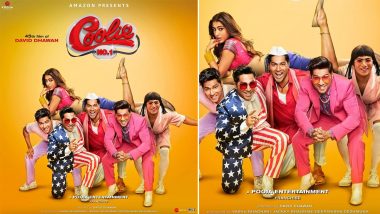 From amongst the list of films that suffered during the pandemic by going the OTT way instead of theatrical releases, was David Dhawan's 45th film Coolie No.1. Starring his son Varun Dhawan and Sara Ali Khan, this version derives inspiration from the original Coolie No.1 that was released in 1995 and starred Govinda and Karisma Kapoor. The movie recently went the OTT way and will be releasing on December 25 on Amazon Prime Video. Coolie No 1, Chhalaang, Durgavati: Here Are The 9 Films All Set To Release On Amazon Prime Video!.

And now, the makers have announced that the trailer of the movie will be releasing on November 28 at 12 PM. However, what makes us ponder is how while in an earlier interview, Papa Dhawan had denied that Varun will not be playing a Coolie in the film. But one of the many looks of Varun in the poster sees him as a Coolie. We wonder wat this is about now. Coolie No 1: Varun Dhawan and Sara Ali Khan’s Comedy Drama to Release on Amazon Prime?.

A post shared by amazon prime video IN (@primevideoin)

In an earlier interview, David Dhawan had revealed, "Coolie No. 1 was 25 years ago. Society has changed radically since then. How can we have the same situation in the new film? There will be no coolie, no VT Station, in London or otherwise. It will be just the title (being used), like Farah Khan’s Tees Maar Khan had nothing to do with any Khan (it starred Akshay Kumar). Sometimes, a title is catchy and has great recall-value. So even though Varun Dawan will star in Coolie No. 1, he won’t play a porter."

(The above story first appeared on LatestLY on Nov 26, 2020 10:56 AM IST. For more news and updates on politics, world, sports, entertainment and lifestyle, log on to our website latestly.com).