Coolie No 1, Chhalaang, Durgavati: Here Are The 9 Films All Set To Release On Amazon Prime Video!

There are nine films releasing directly on the OTT platform Amazon Prime Video. These are not just Hindi films, but even details of movies releasing in Malayalam, Kannada, Tamil and Telugu have also been shared. 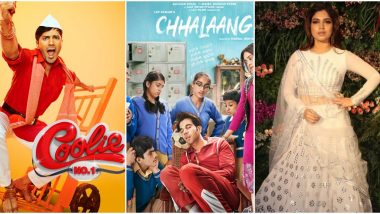 Here’s a major treat for movie buffs! There are nine films releasing directly on the OTT platform Amazon Prime Video. These are not just Hindi films, but even details of movies releasing in Malayalam, Kannada, Tamil and Telugu have also been shared. Varun Dhawan starrer Coolie No 1, Rajkummar Rao’s Chhalaang and Bhumi Pednekar starrer Durgavati are the three Hindi movies that are all set to be released on the streaming giant. Putham Pudhu Kaalai: 5 Directors Collaborate With Amazon Prime to Deliver 5 Heartwarming Stories.

These nine highly-anticipated movies would be premiered by Amazon Prime Video globally. Even in the past we saw some amazing releases and now you got to check the upcoming films that are set to be released on this OTT platform. Let’s take a look at the list of those nine films and their release dates that are going to hit Amazon Prime Video. Chhalaang To Premiere On Amazon Prime Video During Diwali 2020?

It is a Malayalam movie starring Indrajith Sukumaran, Joju George, Sharaf U Dheen, Grace Antony, Soubin Shahir and Parvathy Thiruvothu. Directed by Zakariya Mohammed, this comedy drama is slated to release on October 15, 2020.

The Kannada movie helmed by Karthik Saragur stars Aravinnd Iyer and Arohi Narayan in the lead. This film is all set to be premiered on October 29, 2020.

Starring Suriya and Aparna Balamurali in the lead, Soorarai Pottru has seen delay in its theatrical release almost four times. This Tamil film is now going to be premiered on October 30, 2020.

Hansal Mehta’s directorial features Rajkummar Rao and Nushrat Bharucha in the lead. This comedy drama is all set to be released on November 13, 2020, during the time of Diwali this year.

This is another Kannada film that is scheduled to be released on November 19, 2020. It is a horror thriller starring Varsha Bollamma and Aiswarya Gowda in the lead.

Our next project with Young Hero @ananddeverkonda titled as #MiddleClassMelodies !!

This film stars Vijay Deverakonda’s brother Anand Deverakonda in the lead. It is a comedy Telugu film directed by Vinod Anantoju and slated to be released on November 20, 2020.

Bhumi Pednekar starrer is touted to be the remake of Telugu film Bhaagamathie that featured Anushka Shetty in the lead. This thriller flick will be premiering on December 11, 2020.

R Madhavan and Shraddha Srinath’s romantic drama Maara is another highly-anticipated Tamil movie. It is scheduled to be released on December 17, 2020.

Varun Dhawan and Sara Ali Khan are teaming up for the first time and fans are eagerly waiting to watch them together. The movie buffs are going to be in for a treat during the time of Christmas as Coolie No 1 is releasing on December 25, 2020.

It is owing to the coronavirus outbreak that several filmmakers and producers across industries decided to skip theatrical release of their films and opt for OTT platforms. So out of these nine films, which one are you excited to watch the most? Share your views with us in the comment section below.

(The above story first appeared on LatestLY on Oct 09, 2020 10:41 AM IST. For more news and updates on politics, world, sports, entertainment and lifestyle, log on to our website latestly.com).