Daas Dev could have been a really good movie, if the makers had held a tighter rein on some important aspects of film-making 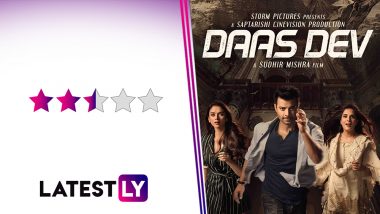 So there is another rendition of Sarat Chandra's classic, Devdas, that is out to challenge Avengers: Infinity War at the box office this Friday. Sudhir Mishra, of Hazaaron Khwaishen Aisi and Yeh Saali Zindagi fame, is giving a contemporary and political spin to the tale with Daas Dev. Rahul Bhat plays the titular hero while Richa Chadha and Aditi Rao Hydari are his Paro and Chandramukhi respectively. Saurabh Shukla, Vipin Sharma, Anil George, Vineet Kumar Singh and Anurag Kashyap form the supporting cast. Here's our review of Daas Dev.

Dev (Rahul Bhat) is the nephew of the political kingpin in UP, Bhishambar (Saurabh Shukla). His father, who was a popular leader himself, was killed in a helicopter blast when Dev was a child, leaving the political reins to his younger brother, Bhishambar. Traumatised by his father's death, Dev spends his adult life on drugs and booze, much to the chagrin of his childhood beloved Paro (Richa Chadha). When his uncle gets a stroke and is hospitalised, everyone wants Dev to clean up his act and get into politics. He does just that with the help of a seductive power-broker Chandni (Aditi Rao Hydari) who is in love with him. When he finally sobers up and get into politics, it takes Dev a long time to realise that he is no leader. He is rather a pawn in the political games and of the machinations of people who he thought was close to him.

At the start of the movie, Sudhir Mishra has paid tribute to Sarat Chandra for his Devdas. In the same acknowledgement, he also thanks Shakespeare. It is after seeing the movie we realise why. For Daas Dev is not only inspired by Devdas, but also by the Bard's most tragic hero - Hamlet. While this combination of two tragic heroes could have made Sudhir Mishra's protagonist layered and exciting, in reality, he is far from that. No blame on Rahul Bhat, who is quite competent here (and excels in scenes where he has to burst out), but his role lacks the sheen that some of the characters surrounding him have in abundance.

Daas Dev has been a project long in the making. Mishra has announced his intention to make his take on Devdas more than a decade ago. However the movie went through a lot of casting changes and when it finally went in floors, had suffered delays in the shoot. While it is great that the film finally saw daylight, you can see the wear and tear in the proceedings.

Daas Dev has an interesting premise, and some unexpected twists and turns. There are a few black comic moments that are viciously funny, four of them involving a gun. The political setting is ripe for treacheries and betrayals, and the story delivers on that in many instances. However, if you come out of the theatre, disappointed, then you can blame the surprisingly convoluted and lacklustre execution by Sudhir Mishra.

Just like the protagonist, even we are clueless as to what's happening on the screen, especially in the first half. The writers try to push too many ideas in these portions, as well as characters, making it quite difficult to follow what's going on. The shoddy editing doesn't help matters, and neither does Hydari's irritating voiceover. The use of over-narration makes us feel that even the director himself is not confident in what he is trying to depict.

The film gets in the better in the second half, with Mishra getting his focus back in the proceedings. It also helps that Saurabh Shukla and Vipin Sharma are on a roll here, pitching in compelling performances. Saurabh Shukla, especially, is on an excellent form here, serving another delectable act after his scene-stealing Rajaji in Raid earlier this year. But there is limited scope to what he can do when technical aspects and a bland love triangle threaten to ruin whatever good is there in the film. Interestingly, it is the Hamlet-esque portions that are far more interesting than the Bengali tale that supposedly inspired this movie.

When it comes to the technical aspects, there is not a single department that stands out here. Editing, as I mentioned earlier, is very confusing. The camera-work felt like it belonged to RGV school of film-making. The sound editing is average, save for the smart use of helicopter sound in a couple of scenes. Even the dialogues lack the punch we expect from a movie in this genre.

Speaking of the rest of the performances, Richa Chadha is uncharacteristically listless in a role where she should have excelled. Aditi Rao Hydari is comparatively better in her seductress act, though why her character had to act so creepy in her love towards Dev is beyond comprehension. Her character also disappears in large portions of the film only to arrive when it is convenient. Vineet Singh is decent in a fairly sizable supporting role that's credited as a special appearance. That in itself is a proof of how long the movie has been in the making (Mukkabaaz came in between and established Vineet as a credible lead actor).

- The portions inspired by Hamlet

- A couple of twists and a few darkly comic moments

Daas Dev could have been a really good movie, if the makers had held a tighter rein on some important aspects of film-making, from writing to the technical aspects. Save for some intriguing sequences and Saurabh Shukla's performance, the movie feels like a missed opportunity to give an exciting, modern touch to Devdas.

(The above story first appeared on LatestLY on Apr 26, 2018 09:22 PM IST. For more news and updates on politics, world, sports, entertainment and lifestyle, log on to our website latestly.com).